Philippine leader to hunt down Maoist rebels after scrapping talks 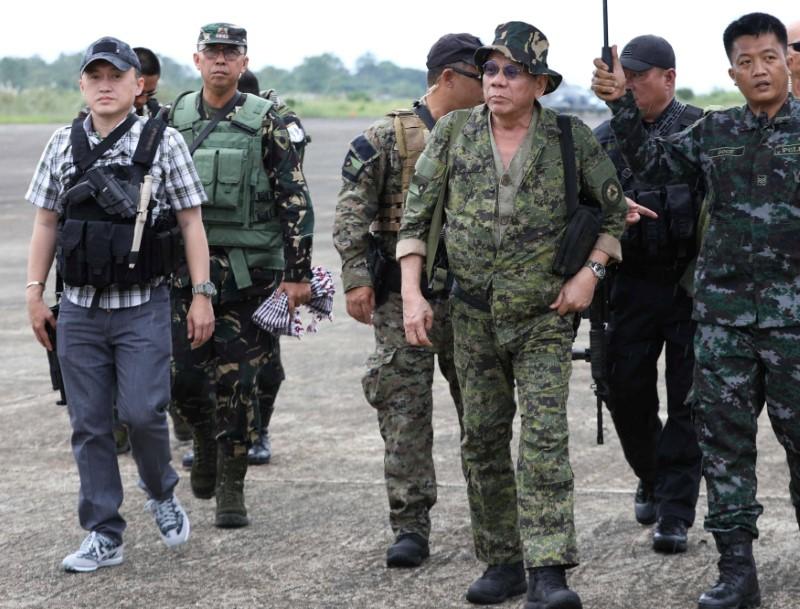 Philippine leader to hunt down Maoist rebels after scrapping talks

MANILA (Reuters) - Philippine President Rodrigo Duterte said he was no longer interested in peace talks with Maoist-led guerrillas and planned to hunt down the insurgents once the military has retaken a southern city from Islamist rebels.

Speaking to troops fighting pro-Islamic State militants on the southern island of Mindanao, Duterte said he would order an offensive against the New People's Army (NPA) after Marawi City is back under government control.

"I do not want to talk peace," Duterte, dressed in a camouflage outfit and combat boots, said on Thursday at an army brigade headquarters about 2 km (a mile) from the battle area.

"No more talk, let us fight," Duterte told businessmen in southern Davao City in a speech on Friday.

Automatic gunfire and artillery shelling were heard during the president's four-hour visit, which was kept secret for security reasons. He distributed watches and supplies and promised soldiers pistols, body armour and other equipment.

"There is a resurgence in communist activities, and after you finish here, we will re-orient and go after them," he said, adding that the communist rebels had taken advantage of the crisis with Islamists to attack government forces in Mindanao.

A municipal police chief was among six police killed by Maoist-led guerrillas in an ambush on their way to investigate a report of a shooting in the central Philippine town of Guilhungan on Negros Island.

Duterte is dealing with the biggest security challenge of his presidency, with troops stretched to secure an island of 22 million people, wary of attacks by Maoists and activities by a loose alliance of militants who have pledged allegiance to Islamic State, foreigners among them.

The peace process with the communists, an initiative important to Duterte, has been fraught with breakdowns, with both sides blaming each other for attacks launched during talks.

"We are all for peace," he said in a statement on Friday. "But, we can only talk about peace when both sides mean what they say. I question the sincerity, integrity and motives of the other side."Military commanders briefed Duterte on the progress in taking back Marawi, the heart of which has been decimated by nearly two months of air strikes.

His national security adviser Hermogenes Esperon told reporters a hard core of fighters has been hemmed in to three barangays, or urban villages, down from the 12 they held earlier. Marawi has 96 such barangays.

More than 420 militants, almost 100 soldiers and 45 civilians have been killed in the nearly two-month-long siege.