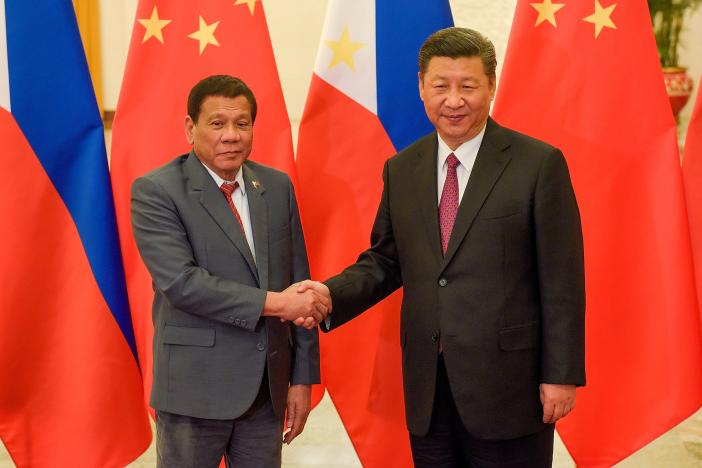 MANILA - Talks last week between leaders of China and the Philippines were frank and friendly, with no threats or bullying, Manila's foreign minister said on Monday, after his president said he was warned of war if he drills for oil in the South China Sea.

Foreign Secretary Alan Peter Cayetano would not disclose more details of the Beijing meeting between President Rodrigo Duterte and China counterpart Xi Jinping, but said they had the kind of relationship in which they could openly discuss preventing maritime conflict.

The notoriously outspoken Duterte said during a televised speech on Friday that Xi warned him there would be war if he tried to explore for oil in a stretch of the sea that both countries claim. China has yet to respond to Duterte revealing contents of the meeting.

"The context was not threatening each other, that we will go to war. The context is how do we stabilise the region and how do we prevent conflict."

The maverick Duterte has faced criticism at home for refusing to push China to comply with an award last year by the Permanent Court of Arbitration in The Hague, which ruled largely in favour of the Philippines.

It also said the Philippines had a sovereign right to access offshore oil and gas fields in its Exclusive Economic Zone (EEZ), including the Reed Bank.

Vietnam, Malaysia, Brunei and Taiwan also have claims to sovereignty in the South China Sea, a vital conduit for trade and a hotbed of territorial squabbling that has stoked nationalist fervour in some countries.

"I will not contradict the president's words. I am just telling you...my interpretation: there was no bullying or pushing around, it was not a threat," Cayetano added. "It was more the threat of conflict will always be there if we don't have dialogue."

A Philippine Supreme Court judge on Saturday urged the government to file another international arbitration case over the alleged Chinese threat, and also lodge a complaint with the United Nations.

Supreme Court Associate Justice Antonio Carpio said failure to do that would mean Duterte would be "selling us out" and forfeiting sovereignty to secure Chinese loans and investments needed for his ambitious $180 billion infrastructure programme.

Presidential Spokesman Ernesto Abella on Monday said the Philippines was "very clear that we are not giving up our claim of sovereignty and sovereign rights." -Reuters