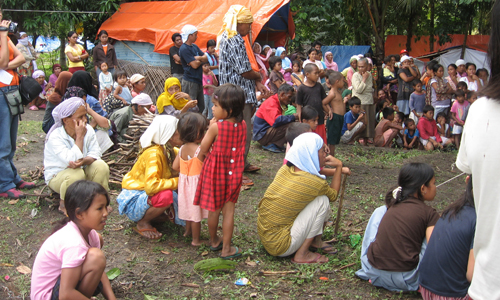 MANILA - A Philippine army offensive against a Muslim rebel faction has forced 70,000 people from their homes, a district governor said on Friday as he appealed for an end to the fighting, saying he was running out of money to feed the displaced. The predominantly Christian Philippines has been battling Muslim rebels in the south of the archipelago for decades and while negotiations with the biggest group have raised hopes for peace, fighting with smaller factions erupts regularly. The latest clashes are between the army and a faction known as the Bangsamoro Islamic Freedom Fighters (BIFF) in a marshy region of Mindanao island. Mujiv Hataman, the governor of the region, said 70,000 people had fled army shelling and he called on the military to end the violence. "I wish the army would end its offensive against the rebels because we are running out of funds to feed and shelter tens of thousands of people from 11 towns around the marshland," Hataman told a radio station. He said the army had told him they needed three more days. An army spokesman, Brigadier-General Jose Kakilala, said soldiers were still pursuing the rebels. "I cannot say we can end the offensive in 72 hours, it depends on the assessment of the ground commander but we can certainly consider the appeal of the governor," he said. The International Committee of the Red Cross said the number of displaced people was rising while a health officer in the region said civilians needed food, clean water and access to sanitation. The fighting has raised concern about a fragile peace process between the government and the biggest rebel group, the Moro Islamic Liberation Front (MILF), which has links with the BIFF. Rebels from both factions killed 44 policemen in a Jan. 25 clash when the police were trying to arrests two al Qaeda-linked militants. President Benigno Aquino has promised the MILF autonomy in a southern region in exchange for peace. But the Senate and House of Representatives suspended work on legislation for the autonomous region amid an outcry after the January clash. –Reuters