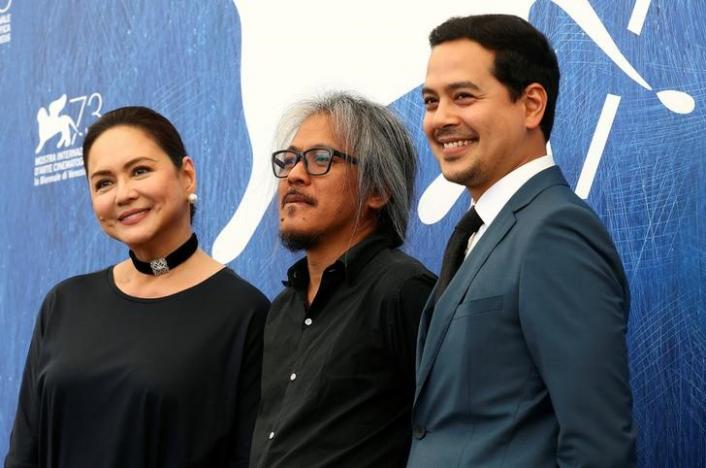 VENICE - A nearly four-hour long movie about a woman's thirst for revenge and her feelings of forgiveness after 30 years in jail for a crime she did not commit won the Venice Film Festival's top prize. Director Lav Diaz has described "Ang Babaeng Humayo" ("The Woman Who Left") as a testimony to the struggles of the Philippines after centuries of colonial rule. "This is for my country, for the Filipino people, for our struggle, for the struggle of humanity," the 57-year-old said as he accepted the Golden Lion award for his black-and-white movie. Diaz, who at the Berlin Film Festival in February had premiered a film that ran over eight hours, said he hoped the latest recognition would create more appreciation for longer movies. "Cinema is still very young, you can still push it," he said. Twenty US and international movies featuring top Hollywood talent and auteur directors were in competition at the world's oldest film festival, in its 73rd outing this year. The event is seen as a launching pad for the industry's award season. All the movies that won awards were examples of directors' "lack of compromise, (their) imagination, original vision, daring, and a kind of pure identity," said Sam Mendes, known for directing James Bond movies "Skyfall" and "Spectre", who headed the jury. "It's taken me out of my comfort zone." Mendes said he hoped the awards would help the films get distributed. The runner-up Grand Jury prize went to Tom Ford's thriller "Nocturnal Animals", the second feature by the celebrated fashion designer. The Best Director award was shared by Russia's Andrei Konchalovsky for the Holocaust drama "Rai" ("Paradise") and Mexico's Amat Escalante for "La Region Salvaje" ("The Untamed"). Commenting on Escalante's drama, which opens with a naked woman being pleasured by a tentacled creature, jury member and Venezuelan director Lorenzo Vigas said the movie affected all the judges emotionally. "We liked the lack of sentimentalism. We felt he really took risks making the film. It's a film that pushes the medium forward," he said. American Emma Stone took the Best Actress prize for her role in the musical "La La Land" and Argentine actor Oscar Martinez was named Best Actor for his performance in the comedy-drama "El Ciudadano Ilustre" ("The Distinguished Citizen"). German actress Paula Beer received the Marcello Mastroianni Award acknowledging an emerging performer, for her role in post-war drama "Frantz". Noah Oppenheim took the best screenplay award for his work on Pablo Larrain's "Jackie", about first lady Jacqueline Kennedy in the aftermath of the assassination of her husband US President John F. Kennedy. The special jury prize went to Ana Lily Amirpour's cannibal-survivor fairytale "The Bad Batch". While the film earned mixed reviews, the jury appreciated its spirit. "Someone has made a very individual, very personal vision, whatever you think of it; that alone, the act of making that film is astonishing," Mendes said. -Reuters