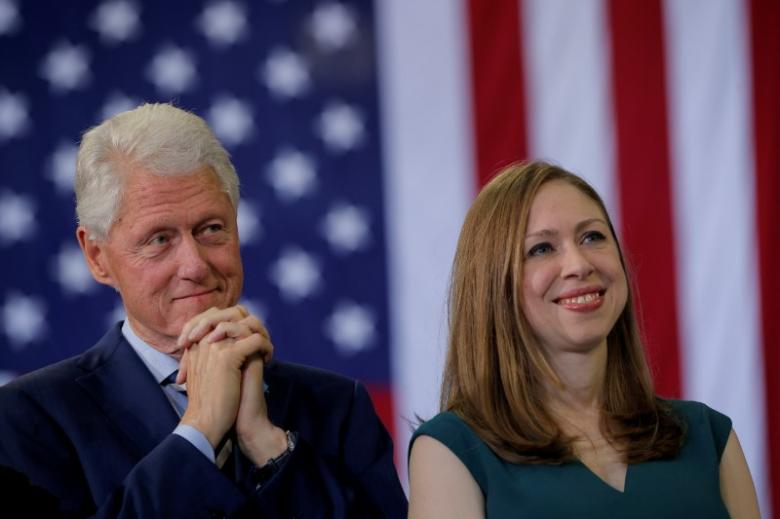 MANILA – Philippine President Rodrigo Duterte on Wednesday denounced the daughter of former US president Bill Clinton for criticizing him over a joke about rape, and questioned whether she was just as outraged by her father's affair with a White House intern.

Duterte was incensed by Chelsea Clinton tweeting at the weekend that he was a "murderous thug with no regard for human rights".

Duterte's rape remark came during a speech on Friday aimed at reassuring soldiers that he would take full responsibility for any backlash to martial law, which he imposed last week on Mindanao island.

He said he would not tolerate abuses but joked that if any soldier was to rape three women, "I will admit it, that's on me".

The firebrand leader is notorious for comments that are deemed offensive by some, but are taken lightly by many Filipinos.

Referring to Bill Clinton's involvement with intern Monica Lewinsky in the 1990s, he hit back at Chelsea Clinton and said he was speaking sarcastically about rape and it was not a joke.

"I was not joking, I was being sarcastic," Duterte said in a speech to navy officers.

"I will tell her, when your father, the president of the United States, was screwing Lewinsky ... the girl there in White House, how did you feel? Did you slam your father?"

The affair led to Bill Clinton being impeached by the House of Representatives in 1999. He was later acquitted by the Senate and completed his second term in 2001.

It was not the first time Duterte has made a joke about rape.

He caused outrage in the lead-up to his presidential election win last year when he recalled a 1989 prison riot in which an Australian missionary was killed, and inmates had lined up to rape her.

In what was intended as a joke, Duterte said the victim was "beautiful" and as mayor of Davao city where the riot took place, he should have been first in line. He later apologized and said he meant no disrespect to women or rape victims.

Duterte is known for his informal, no-nonsense style and his speeches are often loaded with hyperbole, profanity, threats and jokes about taboo subjects.

Duterte said American military servicemen had committed rape overseas, including in the Philippines, recalling a 2005 incident involving a marine who escaped a 40-year jail term by settling a case out of court.

"It is a crime actually committed by soldiers, mostly Americans in Okinawa," he said, referring to several rape cases involving U.S. servicemen stationed in Japan, most recently last year.

"But, we never heard of a Filipino. But I am just warning them that anything they do, I have to answer for it. I take full responsibility for your foolishness. I speak sarcastically." –Reuters