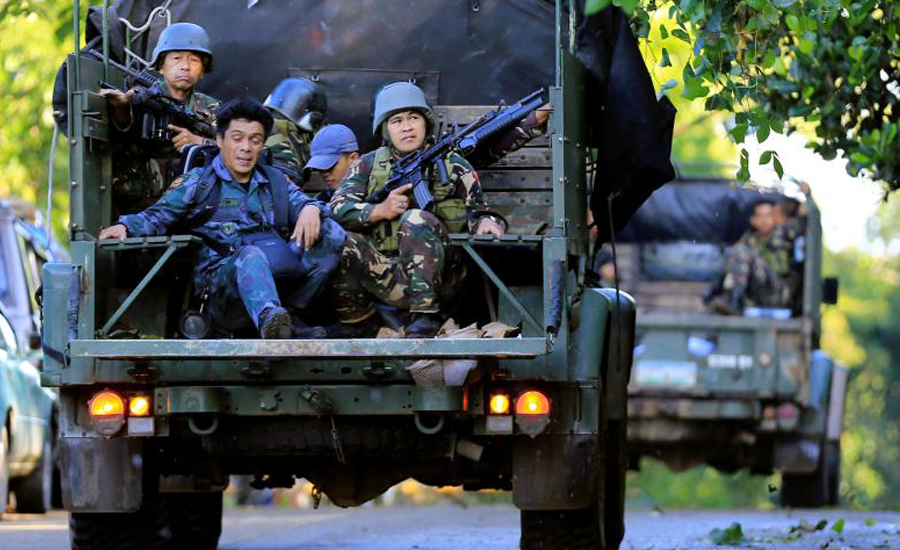 MANILA - Indonesians and Malaysians were among foreign militants fighting the Philippine army in Mindanao island, the Manila's solicitor-general said on Friday, in a rare admission that outsiders were collaborating with domestic miltant groups.

Malaysians and Indonesians were among six killed on Thursday in battles that have raged for three days in Marawi City, where the army has been trying to flush out rebels of the Islamic State-linked Maute group.

The Philippines has deployed attack helicopters and special forces to drive gunmen out of the besieged southern city of 200,000 people, with 11 soldiers and 31 militants killed.

"Before it was just a local terrorist group. But now they have subscribed to the ideology of ISIS (Islamic State)," Solicitor General Jose Calida told a news conference.

"They want to make Mindanao part of the caliphate."

President Rodrigo Duterte on Tuesday delivered on his longstanding threat to impose martial law on Mindanao.

He recently warned that Islamic State was determined to establish a presence in the southern Philippines and the country was at risk of "contamination".

Calida said the Maute group and Islamic State wanted to create an "ISIS province" in Mindanao and the government was not the only target of their aggression.

"People they consider as infidels, whether Christians or Muslims, are also targets of opportunity," he said. "What it worrisome is that the ISIS has radicalised a number of Filipino youth."

His admission elevates the treat of what experts says are moves by Islamic State to exploit the poverty and lawlessness of the majority Muslim southern Philippines to establish a base for extremists from Southeast Asia and beyond.

The Maute is a fierce, but little-known group that has been a tricky battlefield opponent for the military. It was blamed for a bombing in Duterte's home city of Davao in September last year, which killed 14 people and wounded dozens.

The Maute's rise is a source of concern for Mindanao native Duterte, who is familiar with Muslim separatist unrest but alarmed by the prospect of rebels helping Islamic State to recruit and establish a presence in the volatile region of 22 million people.

Tuesday's raid was aimed at capturing Isnilon Hapilon, a leader of a radical faction of another militant group, the Abu Sayyaf. The government says Hapilon has been the point man for Islamic State in the Philippines and has been collaborating with the Maute leaders. Calida said Islamic State had declared that Hapilon was "their emir, or leader in the Philippines". -Reuters