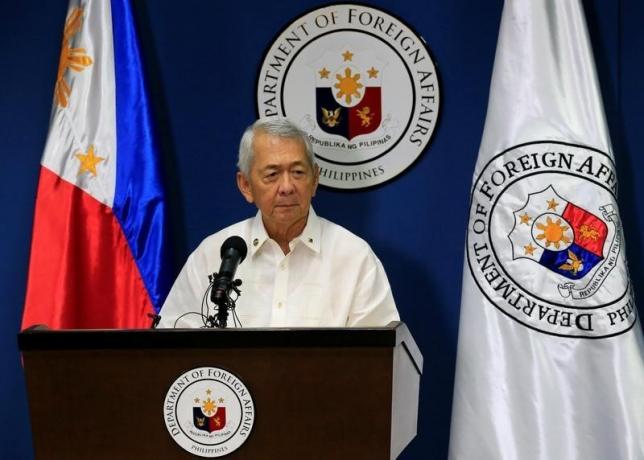 MANILA - The Philippines has turned down a Chinese proposal to start bilateral talks, its foreign minister said on Tuesday, because of Beijing's pre-condition of not discussing a court ruling that nullified most of its South China Sea claims. Perfecto Yasay said he had met his Chinese counterpart Wang Yi on the sidelines of a summit of Asian and European leaders on the weekend and after raising the topic of last week's ruling, it became clear that was a no-go area. China has angrily rejected the verdict by the Permanent Court of Arbitration and the initial case as illegal and farcical. It has repeatedly said it will not change its approach or its sovereignty claims in the South China Sea. "They said if you will insist on the ruling, discussing it along those lines, then we might be headed for a confrontation," Yasay said during an interview with the news channel of broadcaster ABS-CBN. "But I really honestly feel that this is something they have to make on a public basis but I also sensed there was room for us to talk very quietly using backdoor channelling." Yasay said Yi had proposed bilateral talks but only on issues "outside, or (in) disregard of, the arbitral ruling," which he declined because it was not in the Philippines' national interests. Yasay's account of the meeting highlights the challenge ahead for the Philippines, a US ally, in getting China to comply with the decision which has ramped up tensions in the vital trade route. The ruling laid out what maritime rights Manila had and where Beijing had violated its rights under international law, including its massive construction works on Mischief Reef. Manila wanted to enforce the points of the complex ruling step-by-step but as a priority had asked China to let its fishermen go to the Scarborough Shoal without being harassed by its coastguard, Yasay said. China's coastguard was preventing Filipino boats from fishing around the hotly contested Scarborough Shoal, fishermen and officials said on Friday, and China's air force has released pictures showing bombers recently flying over the area. China claims most of the South China Sea, through which more than $5 trillion of trade moves annually. Brunei, Malaysia, the Philippines, Taiwan and Vietnam have rival claims. Yasay said hoped the ruling would lead to other Southeast Asian countries issuing a joint statement, adding that it could help neighbours also locked in disputes with China. "We are not yet engaged in bilateral talks with anyone," he said. "But I would like to see how we can pursue certain provisional arrangements so that it would lead to opening of bilateral or multilateral engagements should that be necessary." -Reuters