Pilgrims stone the devil as Hajj winds down Pilgrims stone the devil as Hajj winds down

MINA, Saudi Arabia (AFP) - Thousands of Muslim pilgrims cast pebbles in the 'stoning of the devil' ritual marking the start of the Eidul Azha holiday Saturday, as a Hajj pilgrimage that drew 900,000 visitors began winding down.

Deadly stampedes have previously overshadowed the ritual, the last major act of the Hajj, but high temperatures and the ongoing Covid pandemic appeared the biggest immediate risk. "I feel I am about to faint, hurry up," said one woman, asking her companion to splash her face with water. No health or safety incidents were reported. 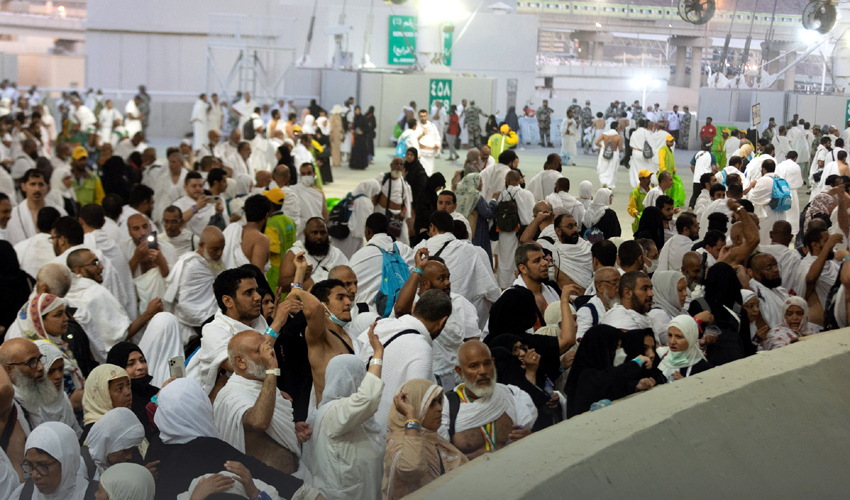 The pilgrims threw stones that they had collected in nearby Muzdalifah. In 2020 and 2021, when Covid restrictions reduced numbers to tens of thousands, worshippers were handed sanitised pebbles in sealed bags.

The Hajj started on Wednesday at the Grand Mosque in Makkah, Islam's holiest site, before an overnight stay in tents and prayers on Mount Arafat, where the Holy Prophet Hazrat Muhammad (PBUH) delivered his final sermon.

After the stoning ritual, pilgrims return to Makkah to perform a farewell 'tawaf' – circling seven times around the Kaaba, the large black cube at the Grand Mosque that is the focal point of Islam.

An hour after sunrise on Saturday, the Ka'aba was already surrounded by circumambulating pilgrims, while others at the Grand Mosque prayed on the first day of Eid.

Facing the mosque, the Makkah Clock Tower – one of the world's tallest buildings – displayed the message 'Eid Mubarak' (blessed Eid) in green. Eidul Azha, the feast of the sacrifice, marks the end of the Hajj.

Muslims across the world celebrate the holiday, buying livestock for slaughter to commemorate the willingness of Abraham to sacrifice his son to show obedience to Allah.

The Hajj, usually one of the world's largest annual religious gatherings, is one of the five pillars of Islam and must be undertaken by all Muslims with the means at least once in their lives. 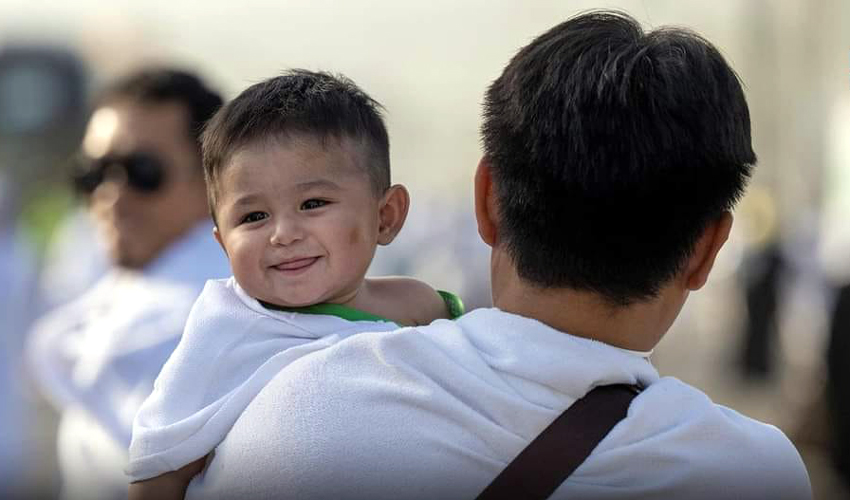 In 2019, some 2.5 million Muslims from around the world took part. But that figure slumped to only a few thousand in 2020 and 60,000 in 2021, all of them Saudi citizens or residents, as the kingdom tried to mitigate the effects of the Covid-19 pandemic.

This year, participation was capped at one million fully vaccinated worshippers. Authorities said Friday that almost 900,000 were in attendance, nearly 780,000 of them from abroad.

Hosting the pilgrimage is a matter of prestige and a powerful source of political legitimacy for Saudi rulers, the custodians of Islam's holiest sites. Barring overseas pilgrims for the past two years had caused deep disappointment among Muslims worldwide, who typically save for years to take part.

The Hajj, which costs at least $5,000 per person, and Umrah pilgrimages that occur at other times of the year are a major engine of Saudi Arabia's tourism sector.

In normal times, they generate about $12 billion annually, keeping the economy humming in Makkah. "We thank God the Almighty that we saw the pilgrims of his house, from different countries of the world, performing their rituals with ease," tweeted Saudi ruler King Salman, 86.

The large crowds have spurred fears that Covid-19 will spread, especially after many pilgrims remained maskless against the orders of Saudi authorities. The Hajj has been taking place against the backdrop of a resurgence of cases in the region, with some Gulf countries tightening restrictions to keep outbreaks in check. 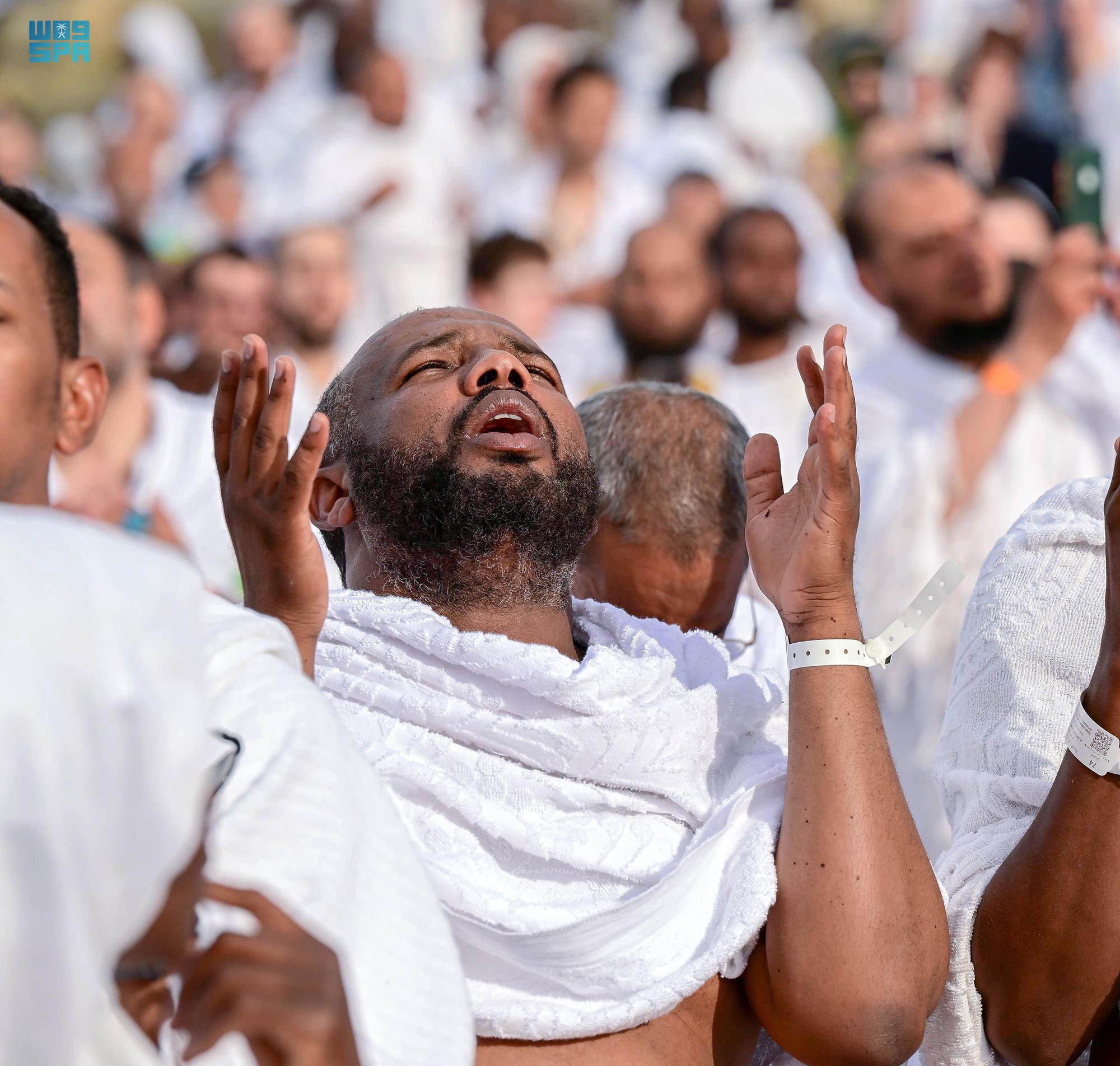 All participants were required to submit proof of vaccination and pilgrims visiting from abroad also had to provide negative PCR tests. Since the start of the pandemic, Saudi Arabia has registered more than 795,000 coronavirus cases, over 9,000 of them fatal. Some 67 million vaccine doses have been administered in the country of over 34 million people.

The Hajj can be physically draining even in ideal conditions, but worshippers this year faced an added challenge: scorching sun and temperatures climbing to 44 degrees Celsius (111 Fahrenheit).