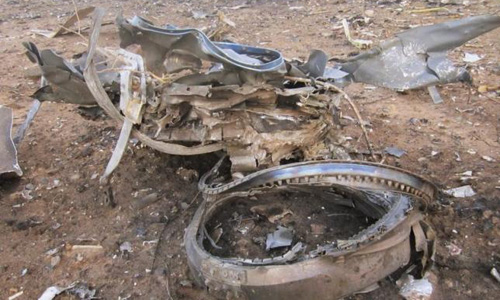 PARIS - Aviation regulators are expected to issue new advice to pilots after investigations into the crash of an Air Algerie jet in Mali last July found it went out of control after being hit by ice as an anti-icing system remained switched off. France's BEA crash investigation agency, which is helping Mali to investigate the crash that killed 116 people, said the MD-83 jet appeared to have run into trouble after vital probes that measure pressure on the engine inlets blocked up with ice. Properly working probes are needed to help the McDonnell-Douglas aircraft measure the thrust of its engines. With the probes iced up as the Algiers-bound jet skirted a storm, the plane's autopilot thought the power was too high and slowed the engines below the level needed to maintain cruise height, starting a chain of events that sent it out of control, BEA said on its website. The statement explained some of the causes of the crash and said it had notified U.S. and European regulators who would issue the new guidance. Investigators have been hindered by damage to "black box" cockpit audio recordings, which were unusable, but have spent months reconstructing engine settings from the data recorder of the MD-83 jet which was operated by Spain's Swiftair. Data analyzed suggested the crew had not activated a de-icing system designed to protect the engine inlet probes. The icing over of the pressure sensors is the first possible cause of the crash to be put forward by the investigators. As it fell towards the ground, the jet rolled suddenly to the left and pointed almost straight down, the BEA said. The crash is one of several accidents in which an aircraft is thought to have lost control at high altitude, putting the spotlight partly on training to help pilots identify and then deal with an aerodynamic stall, or loss of lift. The BEA said black box data did not provide any indication the crew had used stall recovery maneuvers, but said the investigation was continuing, with a final report expected in December. It said a similar situation had started to unfold on a similar plane operated by Swiftair less than two months before the Mali crash, but without serious consequences. In June 2002, a McDonnell Douglas MD-82 jet operated by U.S. carrier Spirit Airlines suffered a loss of thrust on both engines. The BEA said it had shared information on all these incidents with the regulators who would soon issue the guidance to help pilots identify similar problems. - REUTERS