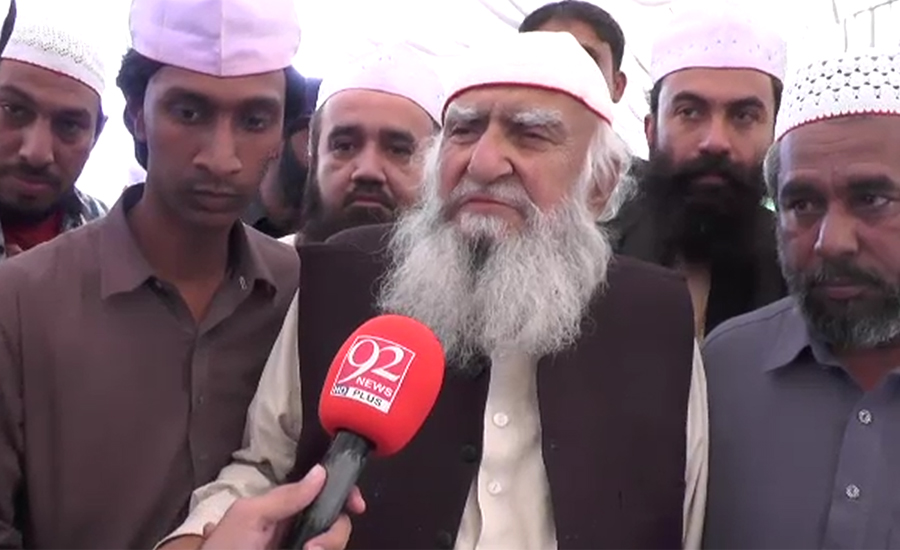 SARGODHA (92 News) – Former Senator Khawaja Hameeduddin Sialvi has on Friday threatened to lead Tehreek-e-Labaik Ya Rasoolallah (TLYR) protest in Lahore if Punjab Law Minister Rana Sanaullah does not resign and apologize till December 3. Talking to media, the Sargodha-based spiritual leader again demanded resignation of Punjab Law Minister Rana Sanaullah. Khawaja Hameeduddin Sialvi stuck to his guns on the demand for resignation of Punjab Minister Rana Sanaullah even after the visit of Minister of Auqaf Syed Zaeem Hussain Qadri to the former’s house at Sial Sharif. As many as 13 members of the ruling Pakistan Muslim League-Nawaz (PML-N) including Member National Assembly (MNA) Sheikh Muhammad Akram had handed their resignations to Pir Sialvi as they would "not compromise on the matter of the Khatm-e-Nabuwwat law". On Tuesday, Zaeem Hussain Qadri called on Pir Sialvi on behalf of the government so as to resolve the issue. However, instead of offering a sympathetic ear, Pir Sialvi made it clear to Qadri that the resignations would only be reviewed if Punjab Law Minister Rana Sanaullah resigns and seeks a pardon for his statements. Pir Sialvi gave a deadline of three days to the government to decide on the matter, failing which, Sialvi said, he would march on Lahore.