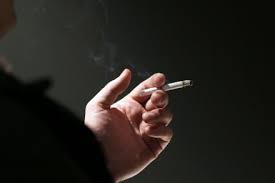 LONDON (Reuters) - Studies on the health impact of "plain" or standardized cigarette packs suggest they can deter non-smokers from taking up the habit and may cut the number of cigarettes smokers get through, scientists said on Tuesday. In a collection of scientific papers in the journal Addiction, researchers said that while standardized packs were still too new to provide substantial evidence, studies so far showed they were likely to reduce smoking rates. Britain plans before May to become the second country in the world to introduce non-branded, standardized packaging for cigarettes, after the government promised last month to pass legislation that would come into effect in 2016. Australia introduced standardized packaging two years ago in the face of fierce opposition from the tobacco industry. Its law forced cigarettes to be sold in plain green packs with health warnings and images showing the damaging effects of smoking. In the Addiction series of studies, researchers found that after Australia's move in 2012, when plain packages were introduced and the health warnings and images on them were made larger, smoking in outdoor areas of cafes, bars and restaurants declined and fewer smokers left their packs visible on tables. Another study found that removing brand imagery from packs increased the focus on health warnings among occasional smokers and adolescents just starting to smoke. Robert West, editor-in-chief of the journal, said plain packaging's effect on young potential smokers was likely to be the most important initial impact. "Even if standardized packaging had no effect at all on current smokers and only stopped one in 20 young people from being lured into smoking (in the UK), it would save about 2,000 lives a year," he told reporters at a briefing in London. Tobacco firms have fought hard against the new law, saying standard packs infringe on intellectual property rights covering branding and will only increase counterfeiting and smuggling. But Ann McNeill, a professor of tobacco addiction at King's College London, said cigarette makers should note that if their product had been invented today, it would never have even reached the consumer market. "For an addictive product that kills so many of its users, the tobacco industry should consider itself fortunate that ... it is allowed to sell its toxic products at all, let alone try to make them attractive through the packaging," she said.