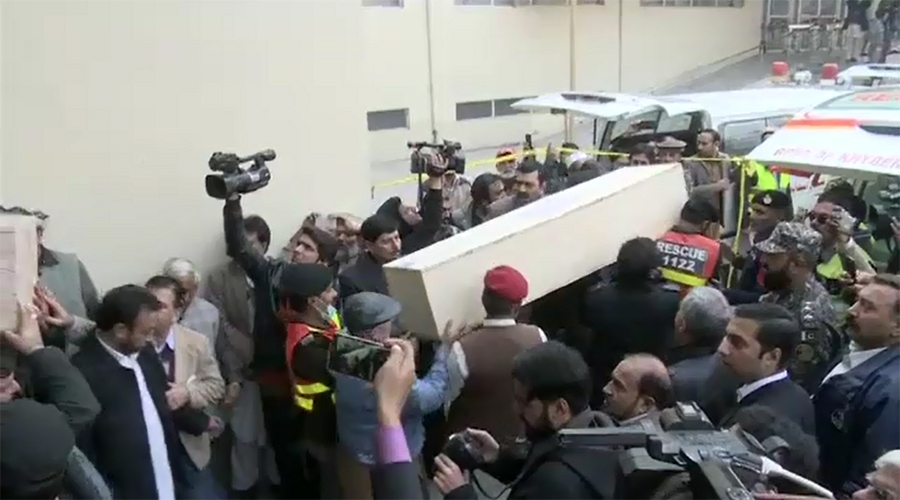 ISLAMABAD (92 News) – The bodies of 39 victims of the plane crash tragedy have been shifted to mortuary in Rawat  after their DNA test at Pakistan Institute of Medical Sciences (PIMS) Hospital. The bodies will be handed over to their heirs after identification through the DNA. The bodies of Muhammad Nawaz and Haji Takbeer have been dispatched to Chitral by ambulance. The bodies have been taken to PIMS for the DNA test before handing them to their families. The brother of renowned religious scholar Junaid Jamshed had already arrived in Islamabad to collect remains of his brother. On the occasion, Minister of state for Capital Administration and Development Division Tariq Fazal Chaudhary has said an information cell has been established at PIMS hospital with number 051-9260340 for information about the dead bodies. He said all travel facilities will be provided to transport the dead bodies of plane crash. The minister said that five dead bodies have been identified so far. Pakistan mourned the 47 victims of its deadliest plane crash in four years, among them a famed-rockstar-turned-Muslim evangelist, two infants and three foreigners, as officials sought to pinpoint the cause of the disaster. Engine trouble was initially believed responsible, but many questions remain, stirring new worries about the safety record of money-losing state carrier Pakistani International Airlines. Earlier, there were no survivors after a plane carrying 47 people crashed into a mountain in northern Pakistan, the airline's chairman said, as recovery operations continued late into the night at the remote crash site. The military said 40 bodies had been recovered and rescue efforts involved about 500 soldiers, doctors and paramedics. The bodies were shifted to the Ayub Medical Centre in nearby Abbottabad, about 20km (12 miles) away. "There are no survivors, no one has survived," said Muhammad Azam Saigol, the chairman for Pakistan International Airlines. PIA-operated flight PK661, which crashed en route from Chitral to the capital, Islamabad. Junaid Jamshed, a well-known Pakistani pop star turned evangelical Muslim cleric, was among those feared dead, an airline official said. PIA said the captain of the flight had reported losing power in one engine minutes before its plane lost contact with the control tower en route to the capital. The airline said the plane crashed at 4:42 pm local time (1142 GMT) in the Havelian area of Khyber-Pakhtunkhwa province, about 40km (25 miles) north of Islamabad. Chitral, where the flight originated, is a popular tourist destination in Pakistan. Saigol said the ATR turboprop aircraft had undergone regular maintenance and in October had passed an "A-check" maintenance certification, performed after every 500 flight hours. He said a full investigation of the crash, involving international agencies, would be conducted. "All of the bodies are burned beyond recognition. The debris are scattered," Taj Muhammad Khan, a government official based in Havelian, told Reuters. Khan, who was at the crash site, said witnesses told him "the aircraft has crashed in a mountainous area, and before it hit the ground it was on fire". In a late night statement, PIA said the plane was carrying 47 people, including five crew members and 42 passengers. Earlier, the airline had said there were 48 people on board. The airline said two Austrian citizens and one Chinese citizen, all men, had been on board. The flight manifest showed three people on board with foreign names. The Austrian foreign minister's spokesman later confirmed two Austrians had been killed in the crash.