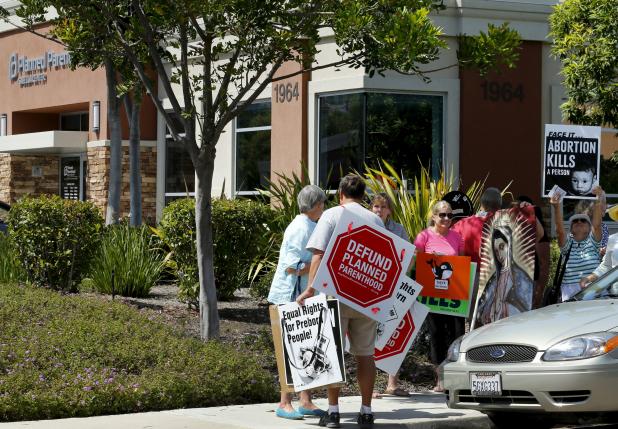 WASHINGTON - Planned Parenthood will be the focus of a partisan showdown in the U.S. Senate on Monday, as abortion foes press forward a political offensive against the women's healthcare group over its role in fetal tissue research. Congressional Republicans are trying to cut off Planned Parenthood's federal funding, reinvigorating America's debate about abortion as the 2016 presidential campaign heats up. The Republican defunding push follows the recent release of hidden-camera videos by the Center for Medical Progress, an anti-abortion group, attacking Planned Parenthood for providing fetal tissue to researchers. Planned Parenthood has hundreds of family planning and reproductive health centers nationwide. It gets up to $500 million per year in Medicaid contributions, and up to $60 million in federal funds for family planning services. U.S. law tightly restricts applying federal funds to abortions. Millions of women, many young and single, rely on Planned Parenthood for healthcare beyond abortions and family planning, including breast and cervical cancer screenings. The group contributed nearly $1.6 million to candidates in the 2014 elections who backed abortion rights, said the Center for Responsive Politics, a campaign finance watchdog. Young, single women are a key demographic for Hillary Clinton, front-runner to represent the Democratic Party in the November 2016 presidential election. So far, Clinton has called the online videos "disturbing," while also saying it was "regrettable" that Republicans, allied with anti-abortionists, were trying to cut off funding. In a standoff likely to go on for months, the Senate plans to hold a procedural vote on Monday evening on the Republican defunding proposal. Democrats are expected to block it, though at least one said he would vote in favor of defunding. "I do not believe that taxpayer money should be used to fund this organization; instead those funds should be sent to other healthcare providers," said Democratic Senator Joe Manchin in a statement. Though Monday's defunding push was expected to be stymied, it was seen as likely to resume in September. Some congressional aides were predicting it could get caught up in budget fights, possibly triggering a government shutdown FETAL TISSUE In the videos, anti-abortion activists pose as researchers trying to obtain fetal tissue and, using hidden cameras, interview Planned Parenthood officials about potential costs. Under U.S. law, donated human fetal tissue may be used for research, but profiting from the sale of it is prohibited. One video shows white-coated lab technicians picking through what appear to be aborted fetuses looking for intact organs. Text at the end of the video asks viewers to "Hold Planned Parenthood accountable for their illegal sale of baby parts." Planned Parenthood says it has done nothing wrong and has not profited from tissue donation. Cecile Richards, the organization's president, said Monday in an interview with MSNBC that the group is only reimbursed for the costs of preservation and transfer of fetal tissue. "Our doctors repeatedly say, 'This is not something that makes money for Planned Parenthood,'" Richards said, accusing Republicans of "using Planned Parenthood and going after women and women’s healthcare simply for political reasons.” - REUTERS