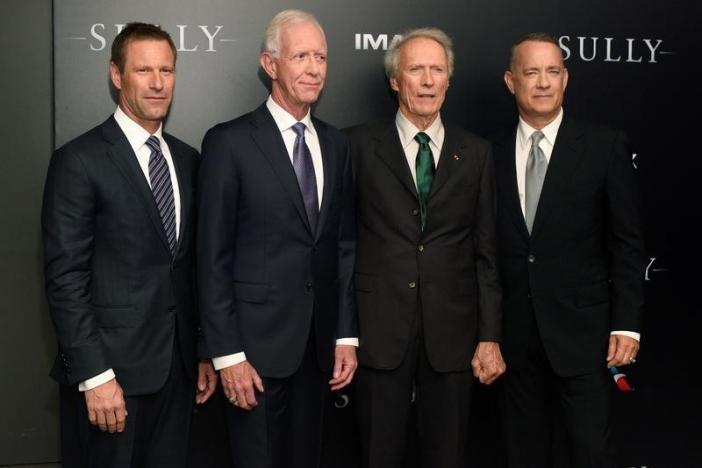 LOS ANGELES – When a US Airways pilot landed a damaged plane in the Hudson River in the middle of winter, saving all 155 people on board, he was immediately hailed a hero - but even heroes can be crumbling on the inside.
"Sully," directed by Clint Eastwood and out in theaters on Friday, follows the immediate aftermath of the extraordinary events on Jan. 15, 2009 that saw Captain Chesley "Sully" Sullenberger land the plane on the Hudson after the Airbus A320-214's two engines were destroyed by a flock of birds. Following the landing, Sully, played by Tom Hanks, and his co-pilot Jeff Skiles (Aaron Eckhart) faced a lengthy National Transportation Safety Board investigation, which tried to determine whether Sully and Skiles had made an error and thus, put both their long-standing reputations at risk. The film spotlights the post-traumatic stress disorder that Sully faces as the world around him hails him as a hero. He struggles through vivid nightmares reliving different versions of the event where the plane crashes into New York buildings, an image that brings to mind the tragedy of 9/11.
Actor Aaron Eckhart (L), Captain Chesley 'Sully' Sullenberger (2nd L), director Clint Eastwood (2nd R), and actor Tom Hanks (R) attend the New York premiere of the film 'Sully' in Manhattan, New York, U.S., September 6, 2016.REUTERS/Darren Ornitz
While Sullenberger's actions were extraordinary, Hanks told Reuters that the captain's mental anguish throughout the hearing was "a human experience that a lot of people find relatable, because all of us at some point have been woken up by a dream that has bothered us."
Sullenberger in turn praised Hanks' portrayal, saying "it's amazing how good he is at his craft and how he's able to in very subtle ways, to do things, say things, behave in such a way that it seems like me." The film examines the sequence of events that led Sully and Skiles to land the plane on the Hudson with numerous variations, each one allowing the audience to "learn something new" about the flight, Hanks said. "What you get from the recreations we did is how many people were involved in the aftermath, but also how specific it did come down to those two guys in the cockpit," the Oscar winner said. Eckhart said Eastwood, a famed actor and Academy Award-winning director, brought a level of experience to the film that echoed both Sully's experience as a pilot and Hanks' experience as an actor - a tale of a hero told by seasoned veterans in the industry. –Reuters