KARACHI (92 News) – Responding to the address of Prime Minister Imran Khan in Washington, Pakistan Peoples’ Party (PPP) Chairman Bilawal Bhutto has said that the ‘selected’ prime minster can’t get of his container in abroad. In a tweet – after the address of PM Khan to a large crowd at a community historic event at Washington’s Capital One Arena – the PPP chairman said, “Pitty even when representing our country abroad Selected PM can’t get of his container. Imran is a ruler not a leader.” “Needs a leader who speaks for all Pakistanis not just himself. If government does opposition & opposition does opposition then who’s left to run the country?,” he tweeted.

Pitty even when representing our country abroad Selected PM can’t get of his container. Imran is a ruler not a leader. 🇵🇰 needs a leader who speaks for all Pakistanis not just himself. If government does opposition & opposition does opposition then who’s left to run the country?

While addressing a large crowd at Washington’s Capital One Arena, the prime minster said that plunders of national wealth are only goal to get the NRO, adding that a king recommended but he will not let accountability go. Talking about the debt of the country, he said Pakistan was looted by previous governments and its debt raised from six thousand billion to thirty thousand billion rupees in just last ten years. Imran Khan said that the previous rulers would have to return the looted money if they wanted to get rid of jail or go abroad. He said government has reached to agreements with different countries on the basis of which it will bring back the looted money stashed abroad. He mentioned National Accountability Bureau, FIA and other institutions are independent. 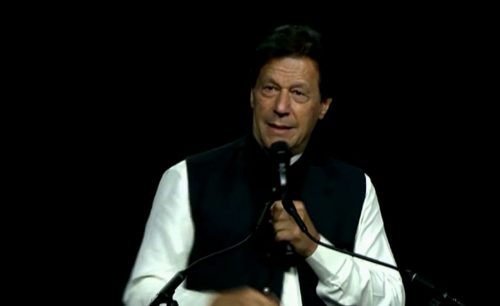 “People ask where is ‘Naya Pakistan’, it is being created in front of your eyes,” PM Khan said. He maintained that the problem in Pakistan was that when political leaders were asked for answers they say that political revenge is being taken and when courts make decisions they say ‘kyun nikala’(why ousted). He said that Naya Pakistan is a place now where any public office holder is accountable to the public. Deliberating the contours of his Naya Pakistan based on the principles of State of Madina, Imran Khan said it would ensure meritocracy, accountability for the influential and unformed curriculum to end the apartheid education system. Imran Khan said in Naya Pakistan everyone is accountable and there could not be two separate laws for rich and poor. He said merit and equality for all is our vision of Naya Pakistan where level playing field will be provided to every citizen. He said democracy has flourished because of meritocracy and accountability. “We have started seizing their undeclared properties; the billions they have taken overseas, we are in talks with other governments to bring that looted wealth back to Pakistan,” PM Imran said.