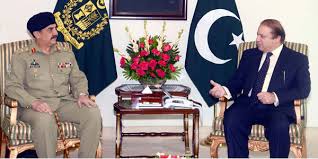 QUETTA (92 News) – Prime Minister Nawaz Sharif and Chief of Army Staff General Raheel Sharif reached Quetta on their two-day visit on Wednesday. Prime Minister Nawaz Sharif will also preside over a meeting of the Balochistan Apex Committee in Governor’s House. Important decisions are expected regarding the National Action Plan (NAP). The prime minister will also meet several political personalities during his visit. Meanwhile, Chief of Army Staff General Raheel Sharif reached Pakistan after meeting with Afghan President Ashraf Ghani and Chief Executive Abdullah Abdullah. Leaders of both the countries resolved not to allow the use of their territories against each other.