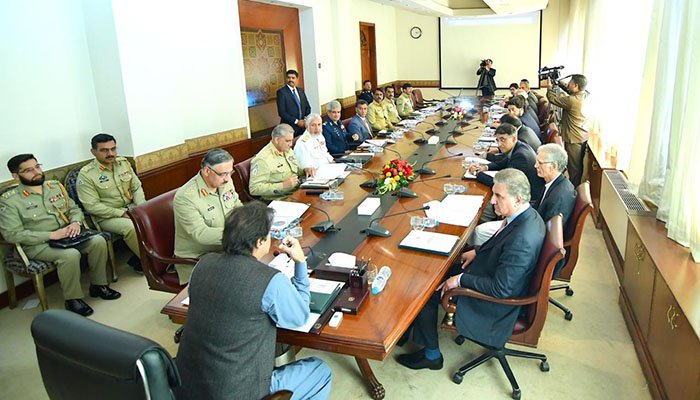 ISLAMABAD (92 News) – Prime Minister Imran Khan chaired the National Security Committee meeting (NSC) on Tuesday at Prime Minister’s House. Sources to privy said that the meeting reviewed the security situation of the region and country. During the meeting, the country’s law and order along with the security situation of the region were discussed. The meeting discussed security matters pertaining to the China Pakistan Economic Corridor (CPEC) were also discussed. The prime minister took the committee members into confidence over his visit to China and meetings with meetings with President Xi Jinping and Russian Prime Minister Dmitry Medvedev. The forum also discussed Pakistan’s relations with Russian, China and the United States. The meeting will discuss the issues related to the internal and external security. The meeting was attended by Chief of Army Staff Gen Qamar Javed Bajwa, the chiefs of Pakistan Navy and Air Force, the chiefs of intelligence agencies and other members of the committee. Prime Minister Imran Khan along with his high-level delegation of ministers and advisers, returned to Pakistan on Monday from his first official trip to China since assuming charge as the country’s premier. Meanwhile, Prime Minister will likely to address the nation after the crucial meeting.