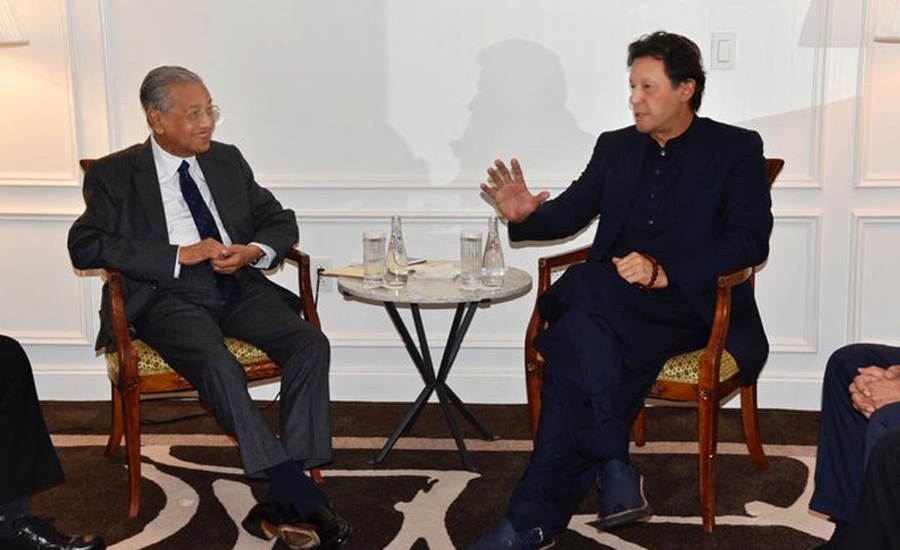 NEW YORK (92 News) – Prime Minister Imran Khan met with Prime Minister of Malaysia Mahathir Mohamad on the sidelines of UNGA session in New York on Wednesday. Both leaders agreed to enhance further bilateral relations. Prime Minister Imran Khan thanked Malaysian Prime Minister Mahathir Mohamad for stressing the implementation of the relevant UNSC resolutions on Kashmir towards the maintenance of international peace and security. Earlier speaking at a high-level roundtable discussion on ‘Countering Hate Speech’ jointly organized by Pakistan and Turkey at UN Headquarters in New York on Wednesday, Prime Minister Imran Khan said that Islam has nothing to do with terrorism. The prime minister said that the incidents of violence are increasing on the basis of discrimination, religion and belief. “We will have to find out the solution to reasons to control such incidents.” He said that racists and extremists have assumed the power in India. “No one linked Hindu religion to terrorism. The Muslims are being defamed in the name of Islamophobia,” he said. Imran Khan said that Islam was linked to terrorism after 9/11. “Islam is the only one which was taught to us by the Holy Prophet Hazrat Muhammad (PBUH),” he said. “We cannot tell the world that how much they are grieved by the desecration of the religion. The world should understand the sentiments of the Muslims about Islam.” He also cautioned against attempts to denigrate revered personalities and scriptures cloaked in the right to freedom of expression and opinion. He called for effective measures to counter hate speech and Islamphobia. He stressed the need to inculcate tolerance among the nations. “The United Nations provides an important platform against hate-mongering. Unluckily, the leaders of western countries linked the terrorism with Islam,” he maintained.