TEHRAN (92 News) – Prime Minister Imran Khan has said that they will not allow their soil to be used against Iran. Addressing a joint press conference with Iranian President Hassan Rouhani after a meeting on Monday, he said that a considerable change is being witnessed in Iran. “The terrorism issue is a challenge for both countries,” he declared. “Pakistan wants no loss be caused to Pakistan from Iran. Difference emerged between us due to terrorism. I have come to end those differences,” he said. The prime minister said that progress of the region lies only in peace. “The Indian forces cannot suppress the voice of Kashmiris by committing atrocities. We are bringing about a revolution in Pakistan, which is ‘Naya Pakistan’” he declared. Iranian President Hassan Rouhani said that both sides had agreed on joint efforts against terrorism. “We will take all steps to complete the Pak-Iran gas pipeline project,” he said. 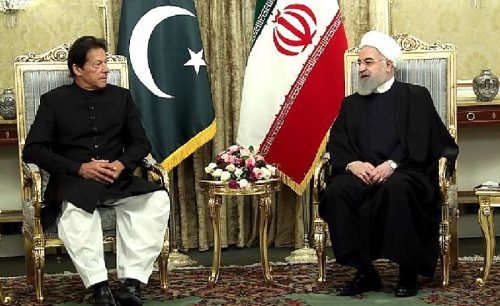 The Iranian president said that unfortunately they witnessed some tensions in the border areas in the recent past where the terrorists perpetrated their nefarious acts. “Both the sides during talks reaffirmed their commitment to peace and security in the whole region.” Hassan Rouhani said that both the sides have expressed the keenness to develop their bilateral relations. “We also emphasized that no third country can harm the brotherly and close relations between the two countries.” The Iranian president said that both the countries have also agreed to bolster their trade and economic relations. “We have agreed to set up a barter committee so that goods and other items could be exchanged,” he added. Hassan Rouhani said that they are also interested in establishing links between Gwadar and Chahbhar ports in order to strengthen the trade relations. He said Iran is also ready to increase the exports of electricity to Pakistan. The two leaders also discussed regional peace and security with particular reference to Afghanistan. The Iranian president also accepted Prime Minister Imran Khan's invitation to visit Pakistan. He expressed the confidence that the prime minister’s visit will serve to be a turning point in expanding relations between the two countries. Pakistan and Iran agreed to security cooperation and form a Joint Rapid Reaction Force to check terrorism. signed a memorandum of understanding for cooperation in the health sector. Prime Minister Imran Khan and Iranian President Hassan Rouhani witnessed the signing ceremony. Earlier, Prime Minister Imran Khan called on Iranian President Hassan Rouhani at Presidential Palace. They discussed matters of mutual interest, including bilateral relations and regional issues. They also discussed the ways and means to further bolster their relations in diverse fields. On his arrival at Sa'dabad Palace, Prime Minister Imran Khan was accorded a rousing welcome. He was also presented the guard of honour. National anthems of both the countries were played on the occasion. The Prime Minister was accompanied by Minister for Human Rights Shireen Mazari, Minister for Maritime Affairs Ali Zaidi, Adviser on Commerce Abdul Razaq Dawood, Special Assistants Zulfi Bukhari, Zafarullah Mirza and Nadeem Babar.