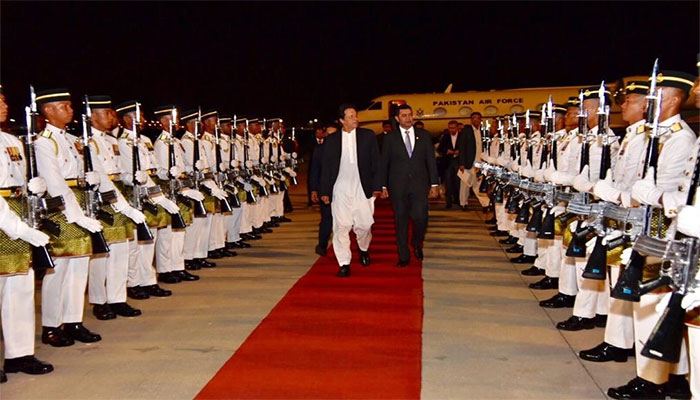 ISLAMABAD (92 News) – Prime Minister Imran Khan on Tuesday reached Malaysia on a two-day official visit. Deputy Foreign Minister Senator Dr Marzuki Yahya welcomed Prime Minister Imran Khan at the Malaysian airport. The prime minister was also presented guard of hounour on his arrival. During the visit, Imran Khan will meet Malaysian counterpart Mahathir Bin Mohamad and the two prime ministers will have a one-on-one meeting, followed by delegation-level talks. Besides enhancing economic, trade and commercial ties, it is expected that the agreement between both the countries would be held for reducing the conditions for visa. PM Imran Khan will also visit at headquarter of anti-corruption commission. The prime minister’s visit to Malaysia will be the last of his trio of planned foreign visits since assuming the top office. He was accompanied by Foreign Minister Shah Mehmood Qureshi, Minister for Finance Asad Umar, Minister for Information and Broadcasting Chaudhry Fawad Hussain, and Advisor on Commerce Abdul Razak Dawood.