ISLAMABAD ( 92 News ) Prime Minister Imran Khan has announced to hold a big public gathering in Muzaffarabad on Friday (September 13) to express solidarity with the besieged people of Indian Occupied Kashmir.

In a tweet on Wednesday, Prime Minister Imran Khan said that the aim of this gathering is to send a message to the world about the continuing siege of Occupied Kashmir by Indian Occupation forces.

https://twitter.com/ImranKhanPTI/status/1171620016174915584?s=20 Meanwhile, Azad Jammu and Kashmir Prime Minister Raja Farooq Haider has summoned a meeting of the Action Committee. Representatives of all Kashmiri political parties will participate in the meeting.

On September 9, Prime Minister Imran Khan welcomed the growing concern and demands by the international community, global leaders, United Nations Secretary General Antonio Guterres and the United Nations High Commissioner for Human Rights (UNHCHR) for India to lift its six-week siege of Indian Occupied Jammu and Kashmir (IOJK). In a tweet on Monday, he said that the international community must not remain indifferent to the massive human rights abuses by Occupation Indian forces under cover of a brutal siege.

“I especially welcome the statement by the UNHCHR chief in Geneva today. I call upon the UN Human Rights Council to immediately set up the independent investigation commission to probe human rights abuses in IOJK as recommended by the UNHCHR's two reports on Kashmir. The time to act is now,” he said. 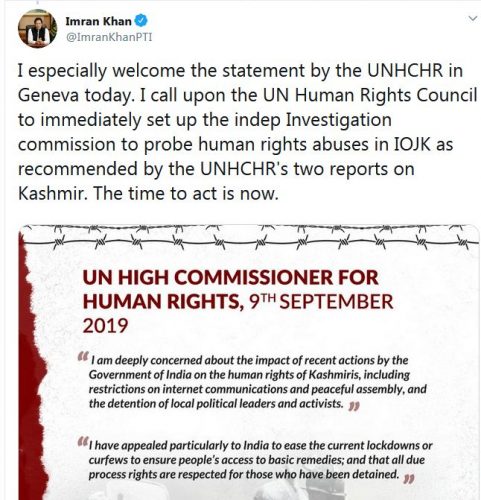