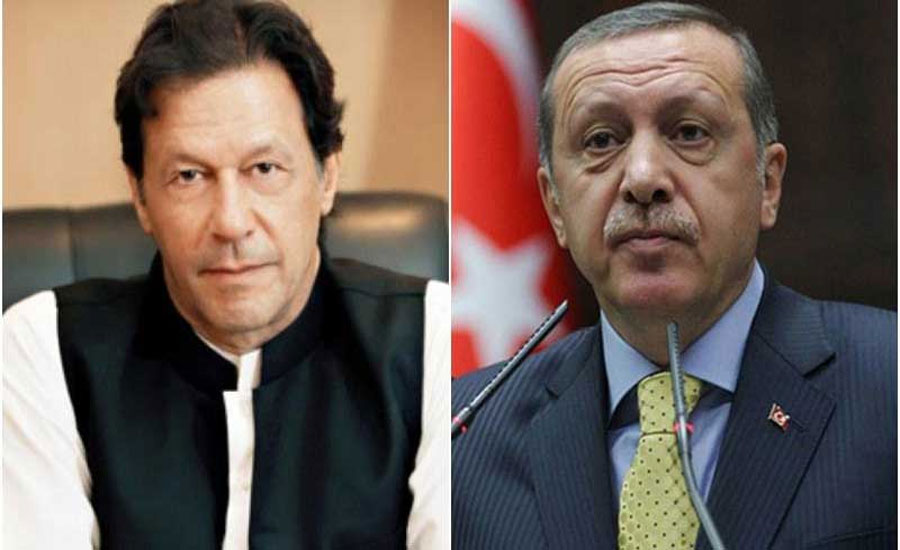 ISLAMABAD (92 News) - Prime Minister Imran Khan and Turkish President Recep Tayyip Erdogan have discussed bilateral relations and core regional conflicts in a telephonic conversation. Both the leaders vowed to further strengthen bilateral collaboration in diverse fields. They also discussed the bilateral ties and developments in the region including the Occupied Kashmir as well as ongoing efforts for peace in Afghanistan. In his call to Prime Minister Imran Khan, President Erdogan extended sympathies and condolences over the loss of precious lives in recent terrorist incident in Pakistan. Both the leaders expressed satisfaction over the strong bonds of brotherhood and close cooperation between the two countries. The Prime Minister and Turkish President reviewed progress made in a number of important areas of bilateral cooperation, particularly since prime minister’s visit to Turkey in January this year. They also noted that bilateral collaboration in diverse fields would be further strengthened during the next meeting of the Pakistan-Turkey High-Level Strategic Cooperation Council to be held in Islamabad later this year. The Prime Minister stated that the government and people of Pakistan are looking forward to President Erdogan’s visit to Pakistan. The premier said Pakistan would play its active in getting peace restored in Afghanistan. He apprised President Erdogan of Pakistan’s steadfast support to the international efforts for peace and reconciliation in Afghanistan. Imran Khan also highlighted the situation in the Occupied Jammu and Kashmir.

Foreign Minister Shah Mehmood Qureshi said President Erdogan took PM Imran into confidence regarding the former’s meeting with Malaysian Prime Minister Mahathir Mohamad. He said Afghan peace process is moving forward on positive note, but situation in the occupied Kashmir is disturbing. “The nuclear powers can’t afford wars as the only was to solve core issues is dialogue. Qureshi said US president Donald Trump had accepted the PM's offer to visit Pakistan and that the relations with Saudi Arabia have further improved.