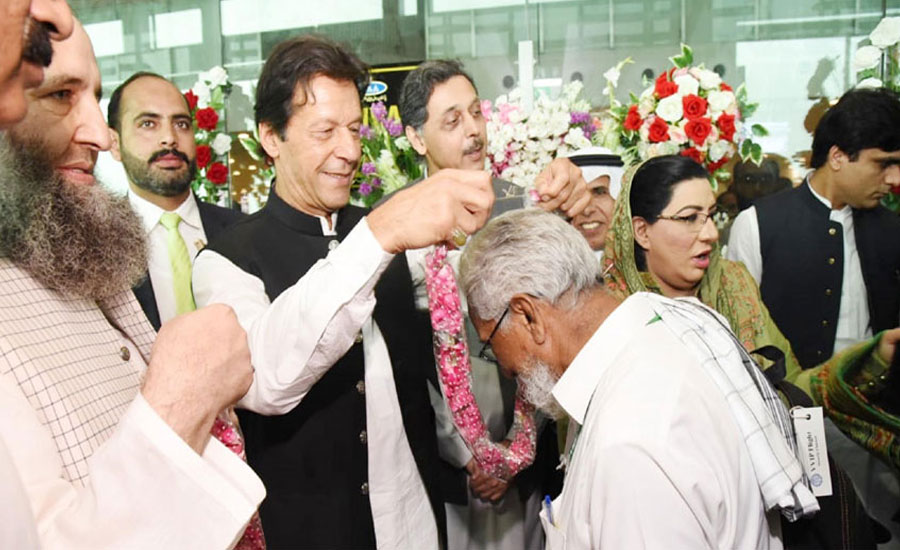 ISLAMABAD (92 News) – Prime Minister Imran Khan on Friday formally inaugurated Road to Makkah project at Islamabad International airport. He was given detailed briefing about the project before inauguration, under which, immigration and other formalities of intending pilgrims travelling to the holy land are being completed at Islamabad airport. For this purpose, special counters manned by Saudi officials have been set up. Road to Makkah programme is a pilot project being started from Islamabad airport and will be extended to other airports of the country in subsequent years. A Spokesperson of Ministry of Religious Affairs said Road to Makkah project is a gift from Saudi Arabia to Pakistani intending pilgrims and 21,000 Hujjaj will benefit from this initiative. Earlier today, Responding to the statement of opposition leaders, Prime Minister Imran Khan has replied that he can face death.

The premier has launched National Poverty Graduation Strategy under Ehsas Program to help the poor uplift their living standard.

Addressing the inaugural ceremony, Imran Khan he said the government will introduce new initiatives under the umbrella of Ehsas Program every month to social protection in the country. “Pakistan Tehreek-e-Insaf (PTI) government is launching various welfare projects with the view to build the country on the pattern of state of Madina,” he added.

10% reward to identifiers of Benami properties

The prime minister announced three to 10 per cent reward to those individuals who identify benami properties of Pakistani citizens. He said the amount recovered from such benami properties will be added to Ehsas Program funds. “Opposition Leader in National Assembly Shehbaz Sharif says do so much cruelty, as much as you can bear. I can bear even the loss of my death,” he said. He said that few people get elected and take advantage of their powers. Criticizing the former rulers, he expressed that they have been ruling over 30 years but could not even make a hospital where they could get themselves treated.