ISLAMABAD (92 News) – Prime Minister Imran Khan, other prominent politicians from various political parties and the candidates cast their vote in their respective constituencies during by election 2018 on Sunday. As per details garnered, the prime minister cast his vote in NA-53 Islamabad. Imran Khan was provided ballet paper and he casted his vote inside polling booth. During his visit, strict security measures were taken. The Pakistan Muslim League-N (PML-N) protested and raised slogans against PM Imran Khan on his arrival. They raised slogans in favour of the PML-N. On the other side, Saad Rafique and Haroon Akhtar cast their vote in Lahore of NA 131 constituency. Saad is contesting elections against PTI prominent electable Humayun Akhtar Khan. Leader of PML-Q Chaudhary Shujaat performed his national duty of casting vote in NA 69 Gujrat. PTI stalwart Ghulam Sarwar Khan cast his vote in NA63 Taxila. 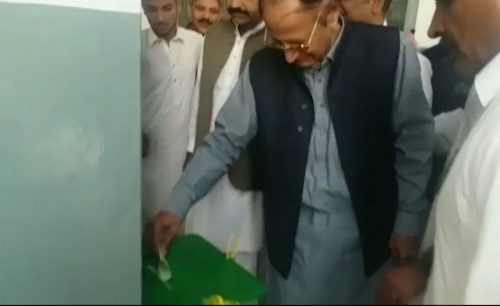