At least 16 people were killed and more than sixty injured when Quetta bound Akbar Express collided with a goods train at Walhar near Sadiqabad on Thursday morning.

According to the details garnered, the rescue operation is underway. Hydraulic cutters have been called at the site to retrieve dead bodies. Injured are being shifted to the hospitals of Sadiqabad and Rahim Yar khan.

The passenger train was going to Quetta from Lahore when it collided with a goods train standing at Walhar Railway Station. The sources said that the engine of Akbar Express was completely destroyed in the accident while three bogies were also damaged, resulting in death of 10 persons while many others sustained injuries. 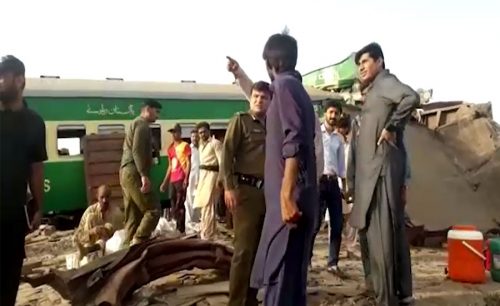 On the other hand, emergency was declared at all hospitals in Rahim Yar Khan and Sadiqabad after the accident. Meanwhile, Railways Minister Sheikh Rasheed Ahmed has expressed deep grief and sorrow over the loss of precious lives in the accident. He also ordered investigation into the incident. Deputy Commisioner Rahim Yar Khan has established a control room to provide necessary information to the victim families.