PM leaves for Pakistan after successful 3-day visit to US 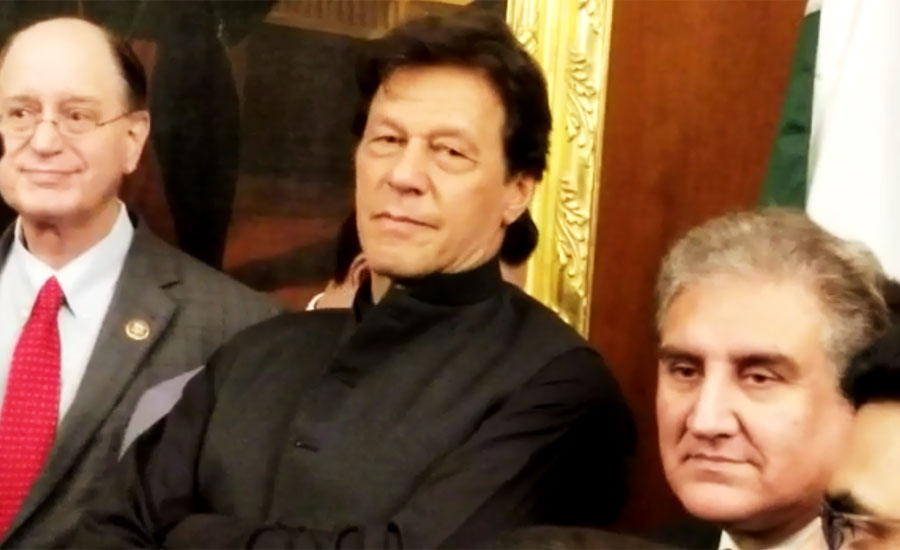 PM leaves for Pakistan after successful 3-day visit to US

WASHINGTON (92 News) – Prime Minister (PM) Imran Khan left for home on Tuesday evening after his successful three-day visit to Washington. During his visit, the prime minister had conducted historic meetings with American leaderships as well as remarkable address to Pakistani community. He had talks with US President Donald Trump, interacted with the congressional leaders and addressed a think tank. He presented the Pakistani case before the US leadership in passionate way. The prime minister also spoke to Pakistani-Americans at Capital Arena that turned out to be one of the biggest ever gatherings addressed by a Pakistani leader. He vowed that he would not compromise on the national interests. Meanwhile, the offer of mediation on Kashmir from US president is success of Pakistan and Indian has mourned after the comment of Trump during the meeting with Imrna Khan. Earlier - addressing the US think-tank at US Institute of Peace - the prime minister said that he said that peace in Afghanistan is vital for progress of the region. “Pakistan needs peace for stability,” he said. “It is the best time for peace in Afghanistan and it only possible through dialogues.” He said that Pakistan and the US are agreed that there is no military solution to the Afghan issue.

PM Imran Khan said that Kashmir is the biggest dispute between Pakistan and India. “I had offered India to hold dialogues soon after assuming the power. It is is our top priority to have better relations with neighbours,” he maintained. “We want the Kashmir dispute should be resolved as per wishes of the Kashmiris.” The prime minister said that the US thought in the past Pakistan was doing nothing. “We have sacrificed 70,000 people in the war against terrorism and suffered a loss of US$1 billion. The prime minister said that the country was near to bankruptcy due to corruption of former rulers. “The Supreme Court had termed the former prime minister Sicilian mafia. I am not against the political parties, but fighting against the mafia which had destroyed the country during last 10 years,” he said. PM Khan said that the opposition is trying to destabilize the government. “When we talk about accountability, the opposition says it is being targeted,” he added. The prime minister said that the judge who awarded sentence to the former premier was being blackmailed. “Such work is done by the mafia. Nawaz Sharif had purchased the costly flats in London.” He said that a media group had gone to the last extent to conceal the wrongdoings of the former rulers. Replying to queries, the prime minister said that after the meeting with President Trump, now he will meet with the Taliban and encourage them to meet with the Afghan government. “Today, the government and the military are on the same page with regard to the peace process in Afghanistan. “We should get all of Afghanistan’s neighbors involved in the peace talks. There will be people who will try to put a spanner in the works, so if all the neighbors are involved, things are more likely to go smoothly.” 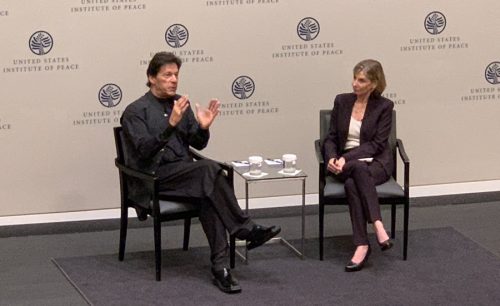 Asked about the struggles of some international NGOs to work in Pakistan, PM Khan admitted that there have been problems, but that restrictions on them were increased in part to protect NGO workers. He said that they are working on a case-by-case basis. About the freedom of press, he said that “I spent 18 summers of my life in Britain. I saw their press freedom. I believe that in Pakistan, we have even more press freedom than in Britain. Some of the things you see printed in Pakistan would never be seen in Britain.” Prime Minister Imran Khan said that today there is no concept in Pakistan of “strategic depth” in Afghanistan. “We feel that pursuing that policy caused a lot of damage within Pakistan’s internal affairs,” he said. About reforms in Pakistan, Imran Khan said that it was imperative now to reform the tax system in Pakistan. “One year in we have finally stabilized our economy. Now, we can focus on our priorities. We believe that development means human development. The gap between the rich and poor has grown every year,” he said.