MIRPUR (92 News) – Prime Minister (PM) Imran Khan on Monday visited District Divisional Headquarters Hospital, Mirpur to inquire about the health of the earthquake victims. Expressing his grief over the loss of human lives, PM Khan said, he was informed about the devastating quake, when he was in the US for UNGA session. “I wanted to visit soon, but was unable to do so.” He said the victims will not be left alone, government will not take every possible measure to provide relief to them. During his visit, he said, “I was [on my trip to] the United Nations when I heard about the earthquake and I was extremely saddened," he was quoted as saying by his official team.” “I wanted to visit immediately but my return from the United States was delayed. The people of Mirpur, who suffered [...] losses, have my greatest sympathies. I can feel your pain.” 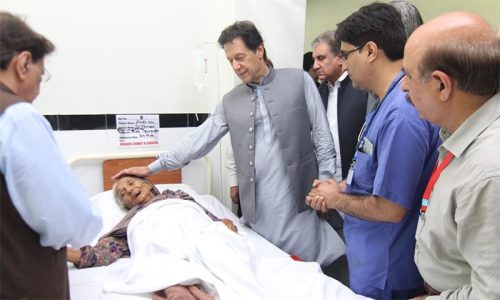 He said that the government was working on a package for the rehabilitation of victims. "Every possible step for the [assistance] of earthquake victims will be taken immediately," he assured. Strict security arrangements were made in the area ahead of Prime Minister Imran's visit. Earlier, he was warmly welcomed by Prime Minister AJK, Raja Farooq Haider and other government officials upon his arrival in Muzaffarabad.

A meeting chaired by Imran Khan in Mirpur was briefed about the deaths and damages caused by earthquake in Azad Jammu Kashmir. The meeting was also informed about the relief measures and the strategy for rehabilitation of quake victims. During a meeting with the AJK Prime Minister Raja Farooq Haider, Prime Minister Imran was briefed on the losses as well as rescue, relief and rehabilitation measures taken by the AJK officials, Radio Pak reported. The meeting, chaired by the Pakistani premier, was also attended by Foreign Minister Shah Mahmood Qureshi, Minister for Kashmir Affairs and Gilgit-Baltistan Ali Amin Gandapur and National Disaster Management Authority Chairman Lt Gen Mohammad Afzal. The death toll has jumped to 40, with more than 500 injured so far as rescue activities are underway in the area. At least 6,000 houses were destroyed completely, while 7100 cattle farms have been damaged in the quake.