PM calls for expanding consensus for One Belt One Road 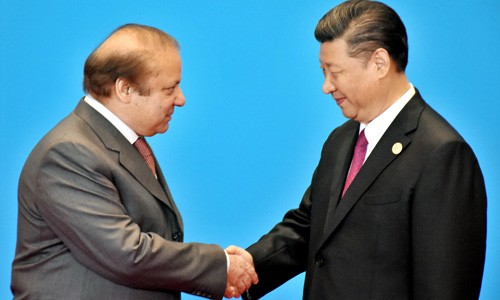 PM calls for expanding consensus for One Belt One Road

Adressing the Leaders’ Roundtable on Policy Synergy in Beijing on Monday, he said that it is imperative that we appreciate the “Belt and Road” initiative in its proper perspective of interconnected development. It is now turning into the centre of gravity for half of the world’s economies – in Asia, in Africa and in Europe.

The prime minister said that as part of the same initiative under the China-Pakistan Economic Corridor (CPEC) banner, we have made phenomenal progress in a short span of time through active participation in the areas of infrastructure, energy, industrial zones and telecommunications.

Nawaz Sharif said that Pakistan is harmonising national development plans with the CPEC, closely coordinating with China for planning and implementation of CPEC and liaising with International Financial Institutions for policy alignment.

He called for expanding consensus for One Belt One Road, enhancing cooperation in development and implementation and prepare a blueprint and roadmap for long-term cooperation.

“The CPEC is creating new supply and logistic chains, as well as manufacturing networks. It has infused Pakistan’s economy with new vitality and dynamism,” the premier said.

He went on to say that Pakistan's Gwadar Port, the pivot of CPEC, will link up East, West and South Asia, adding that it will also reach out to African and European markets. “Progress on the port is swift, and very soon Gwadar will develop into an inspired, organic, and dynamic city full of great opportunities.” He said Gwadar is emerging as a symbol and conduit of connectivity, mutuality, and empowerment.