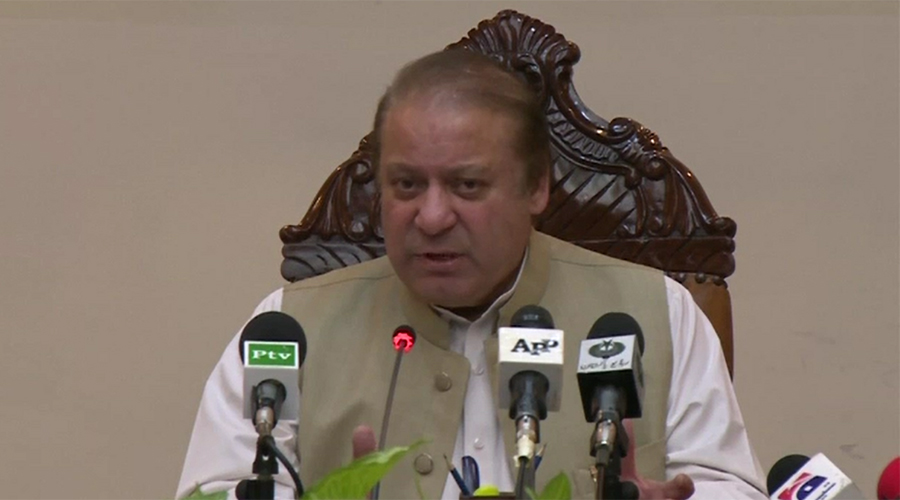 ISLAMABAD (92 News) – Prime Minister Nawaz Sharif has postponed a meeting to review the National Action Plan in Karachi on Friday. However, he will visit Muzaffarabad and hold a meeting with the Hurriyat leaders with regard to his US visit. He will leave for America on Friday night where he will address the United Nations General Assembly and highlight the Kashmir issue. He will also talk about Pakistan’s efforts in the war against terrorism. The prime minister will also meet the US President Barack Obama and other state heads. However, a meeting with Indian PM Narendra Modi is not scheduled. Earlier chairing a meeting of the Cabinet Committee on Energy here at the PM House on Thursday, he vowed to fulfill the promise of ending energy crisis during his tenure. He said that besides ensuring affordable and sufficient electricity for the people, arrangements need to be made for the future power needs of the country in view of increased economic growth and industrial activity. He called for timely execution of all ongoing power generation projects in the country. The PM also urged transparency in the projects. “The work on extension in the Neelum Jhelum project should be ensured,” he maintained. Chairman WAPDA Lt Gen (retd) Muzammil Hussain briefed the meeting on the status of 969 MW Neelum-Jhelum Hydropower Project (NJHPP) and 3478 MW Tarbela-IV Extension. The chairman apprised the meeting that during his recent visit to the sites, a mechanism has been finalized to complete the project on schedule. “The first unit of NJHPP would be commissioned in February 2018, while remaining units will be functional before the summer of 2018.” The WAPDA chairman said that the first unit of Tarbela-IV would be ready for inauguration by the Prime Minister on August 14, 2017. Appreciating performance of the WAPDA chairman, the prime minister expressed satisfaction over the progress on NJHPP as well as Tarbela-IV. The prime minister called for ensuring utmost transparency while executing the hydropower projects. The meeting was informed that nine power projects of over 1000 MW, including 330 MW (Wind) and 680 MW (Nuclear) were ready for inauguration by the prime minister. It was further informed that the Thar-Matiari and Port Qasim-Matiari Transmission Line projects were also ready for ground-breaking by the prime minister. Minister for Water and Power Khawaja Muhammad Asif, Minister for Information Senator Pervaiz Rashid, Minister for Planning, Development & Reforms Ahsan Iqbal, Minister for Railways Khawaja Saad Rafique, SAPM Tariq Fatemi and other senior government officials were also present.