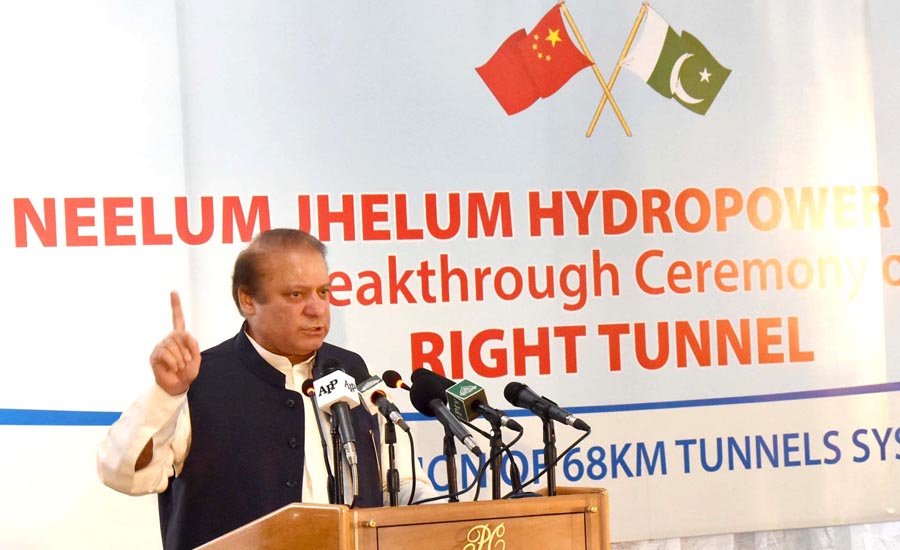 MUZAFFARGARH (92 News) – Prime Minister Nawaz Sharif has said that ‘Lion’ will again come in 2018 and take away the closed-eye pigeon.

Speaking at a ceremony of Right Head-race Tunnel of Neelum Jehlum project on Friday, he asked the opponents not to create hurdles in the projects benefiting the people.

Criticizing the opponents, the prime minister said: “Your agenda is to call our names and we did not respond in the same coin. Our opponents make tall claims, but lose the elections.”

He said that had they not worked the energy projects would have not been completed in 20 years. “In 2012, the people were talking about the country going to be bankrupt.”

Nawaz Sharif said that they had broken the backbone of terrorism.

The strategically important 969 MW-Neelum Jhelum Hydropower project will mark a major milestone towards its completion, as excavation of about 68-kilometer long tunnels system of the project will stand completed, when the second Tunnel Boring Machine (TBM) deployed on the project will break through the Right Headrace Tunnel.

With this significant development, the water way system of the project will enter the final phase which is scheduled to be completed in seven months. Thereafter, the tunnels will be ready to divert water from Dam site to Power House.

First unit of Neelum Jhelum Hydro Power Project will start electricity generation by the end of February 2018, the second unit in mid March, whereas the third and the fourth unit will be completed in April 2018.