PM orders action against people behind hike in medicine prices

PM orders action against people behind hike in medicine prices

ISLAMABAD (92 News) – Prime Minister (PM) Imran Khan has ordered to take immediate action against the people behind hike in the prices of medicine on Wednesday. According to the details garnered, the prime minister directed to bring the prices of medicine to the previous position within 72 hours. Meanwhile, Punjab Chief Minister Sardar Usman Buzdar called on Prime Minister Imran Khan in Lahore on Wednesday during his one-day visit. The matter of mutual interest, overall political situation and administrative issues of the province were discussed during the meeting. The chief minister apprised the premier about performance of provincial ministers and construction work on shelter homes in the province. 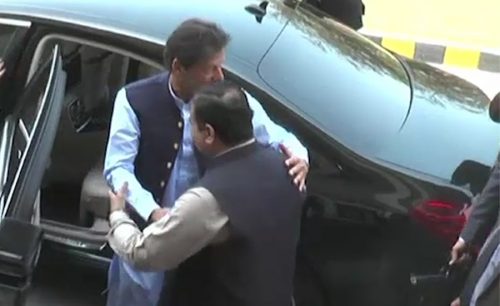 Pak-India differences could only settle with dialogue: PM

PM Imran Khan has said that peace with India over the Kashmir dispute would be ‘tremendous’ for the wider region. In an interview with BBC, he said that the nuclear-armed neighbours could only settle their differences with dialogue.
Asked what message he wanted to send to Indian Prime Minister Narendra Modi and his country, he said that the Kashmir issue ‘has to be settled’ and ‘cannot keep boiling like it is’. “The number-one tasks of the two governments is how are we going to reduce poverty and the way we reduce poverty is by settling our differences through dialogue and there is only one difference – which is Kashmir,” he said. Imran Khan also spoke about the dangers of confrontation between the two neighbours. “Once you respond, no-one can predict where it can go from there,” he said. Offering the hand of friendship to India, the prime minister said that let’s work together to solve our common problems. “If India and Pakistan can find that, everything else could be sorted out easily.” “Perhaps if the Bharatiya Janata Party (BJP) wins, some kind of settlement in Kashmir could be reached,” he said. During his interview, PM Imran Khan also touched on the case of Asia Bibi, saying that she would be departing the country ‘very soon’. “”There is a little bit of a complication. And I can’t speak on the media about [it]. But I can assure you she is safe and she will be leaving in weeks,” he said.