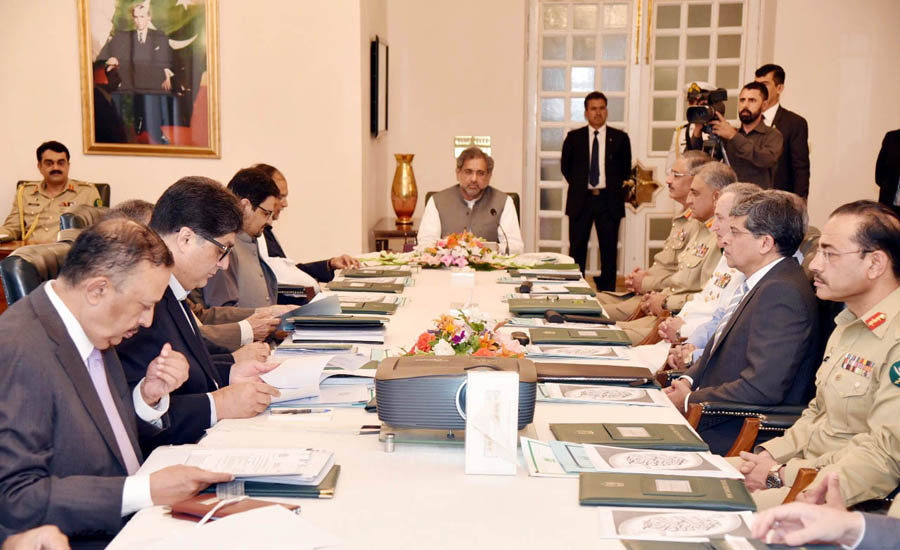 ISLAMABAD (92 News) – The 23rd meeting of the National Security Committee was held in Islamabad on Saturday with Prime Minister Shahid Khaqan Abbasi in the chair. The meeting was attended by the Federal Ministers Ahsan Iqbal, Khurram Dastgir Khan, Miftah Ismail, Chairman Joint Chiefs of Staff Committee General Zubair Mahmood Hayat, Chief of Army Staff General Qamar Javed Bajwa, Chief of Naval Staff Admiral Zafar Mahmood Abbasi, Chief of Air Staff Air Chief Marshal Mujahid Anwar Khan, Director General ISI Lt Gen Naveed Mukhtar and senior civil and military officials. The NSC expressed satisfaction on the principled stand taken by Pakistan on Kashmir and Palestine and its articulation at various world forums. The committee reviewed the Azad Jammu and Kashmir and Gilgit-Baltistan reform proposals from the perspective of their conformity with the aspirations of the people of Azad Jammu and Kashmir and Gilgit-Baltistan. After detailed deliberations, a consensus was reached on: the devolution of greater administrative authority and financial powers to the Azad Government of the State of Jammu and Kashmir and the Government of Gilgit-Baltistan; retention of the Azad Jammu and Kashmir and Gilgit-Baltistan Councils as advisory bodies; and the grant of a five-year tax holiday to Gilgit-Baltistan so as to create adequate incentives for the development of the region and bring it at par with the other areas of Pakistan. The National Security Committee deliberated the question of the merger of the Federally Administered Tribal Areas with the province of Khyber Pakhtunkhwa. The prime minister briefed the committee that his consultations on the issue with the leaders of other political parties in the Parliament had reflected a broad consensus on the merger of FATA with Khyber Pakhtunkhwa. The committee endorsed that FATA will be merged with Khyber Pakhtunkhwa along with the introduction of the administrative and judicial institutional structures and laws of Khyber Pakhtunkhwa. The committee directed the concerned ministries to work out the constitutional, legal and administrative modalities for the merger in consultation with all parties in the Parliament. The committee also endorsed the provision of additional well-monitored development funds for the FATA region during the next ten years, with the stipulation that these funds would not be re-appropriated to any other area of Khyber Pakhtunkhwa. The Interior Ministry presented details of the measures it had formulated to liberalize the visa regime, in particular for tourists and businesspersons. Reviewing these proposals, the National Security Committee instructed the Interior Ministry to further refine its proposals and submit them for consideration in its next meeting. The Ministry of Foreign Affairs briefed the committee on the regional and global security situation. The committee resolved that Pakistan will continue to play its role for peace and security in the region and beyond.