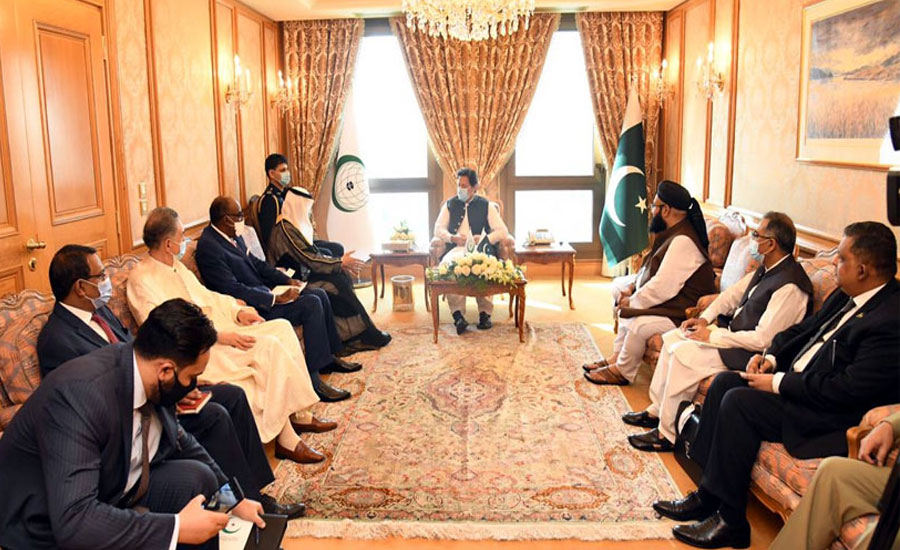 MAKKAH (92 News) - Prime Minister Imran Khan has called upon the international community to show a common resolve against intolerance and incitement to violence on the basis of religion.

Talking to Secretary General of the Organization of Islamic Cooperation Dr Yousef A Al-Othaimeen in Makkah today, he urged the international community to work together for inter-faith harmony and peaceful co-existence.

Highlighting the rise of Islamophobic incidents in different parts of the world, the premier stressed the importance of a concerted response from the OIC.

The premier emphasised that it has to be a collective endeavour of the Muslim leadership to make sure that the world recognised the special love and reverence that Muslims have for the Holy Prophet (PBUH). He said it is imperative not to allow anyone to create any linkage between Islam and terrorism.

It is pertinent to mention that following the Prime Minister's letter addressed to Heads of State of Muslim countries, the OIC Council of Foreign Minister (CFM) in Niamey had adopted a unanimous resolution on observing 15 March as International Day to Combat Islamophobia.

Imran Khan strongly condemned the Israeli attack against Palestinians in Qibla-e- Awaal, the Al-Aqsa Mosque, and reiterated his call on the international community to take steps to protect the Palestinians and their legitimate rights. He also called upon the OIC to play its rightful role in addressing the serious situation.

The secretary general shared information with PM Khan on the OIC's activities in support of the Jammu and Kashmir dispute. The OIC has steadfastly supported the Kashmir cause and in this context the Niamey CFM culminated with a comprehensive resolution on the issue.

The prime minister and secretary general discussed Pakistan-OIC collaboration on a range of issues. The Prime Minister stated that Pakistan is looking forward to hosting the 48th Session of the Council of Foreign Minister.