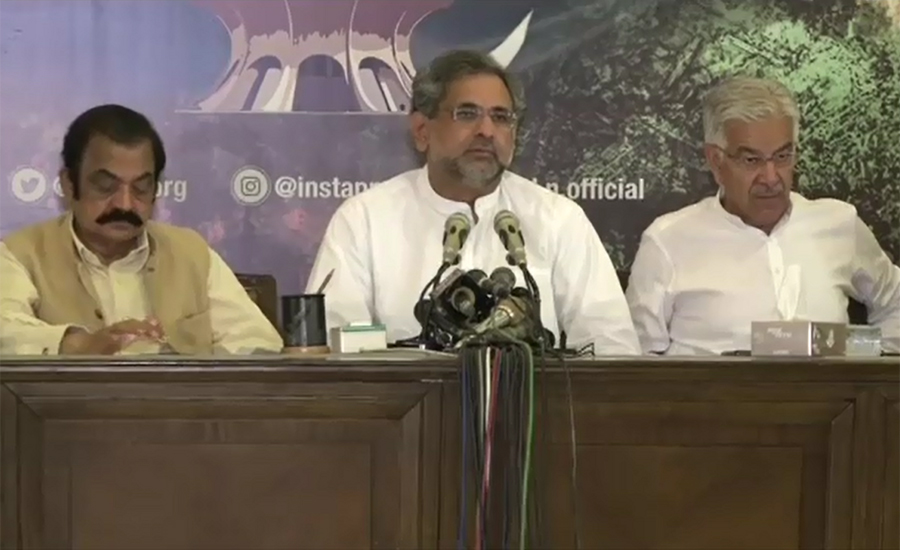 LAHORE (92 News) – PML-N leader Shahid Khaqan Abbasi has said that his party had launched several uplift projects through the foreign debts. Addressing a joint press conference on Thursday, he said that the PML-N government had fought the war against terrorism. He said that the present government is accomplishing the projects launched by their government. “The PM would have made the speech in the assembly instead of at night had he some courage,” he declared. The PML-N leader said that an attempt is being made to divert the attention from the failures of the government. About the National Accountability Bureau (NAB), he said that the NAB is only pressurizing the opposition. PML-N leader Khawaja Muhammad Asif said that progress can only be made by the rule of law. “A 40 percent increase has been made in taxes. How the government that cannot achieve the target of Rs4,000 billion would get the target of Rs5,500 billion?” he said. He said that the prime minister had no task except to call the names of the opposition. “Why are the cases not being made against politicians who are blamed for corruption?” said Kh Asif. He said that there is provision of mid-term elections in the constitution. “If announced, we will vigorously participate in the mid-term elections,” he added.

On June 1, PML-N leader Shahid Khaqan Abbasi said that the rupee value had lost by 27 percent in a year while inflation doubled in nine months. Addressing a press conference on Saturday, he said that gas had increased by 143, petrol 23 and electricity by 20 percent during this period. “Gross Domestic Product (GDP) has come to US$280 from US$313. The country will weaken at the military and external level if the economy would weaken,” he said. The PML-N leader said that they were not fighting the battle for power. “The protest against the government in and out of the parliament is mandatory,” he said. “The government has taken the loan in a year that they received during five years,” he said. Shahid Khaqan Abbasi said that a politician is not afraid of arrests. “Imran Khan is the first PM in the country who does not speak truth,” he said.