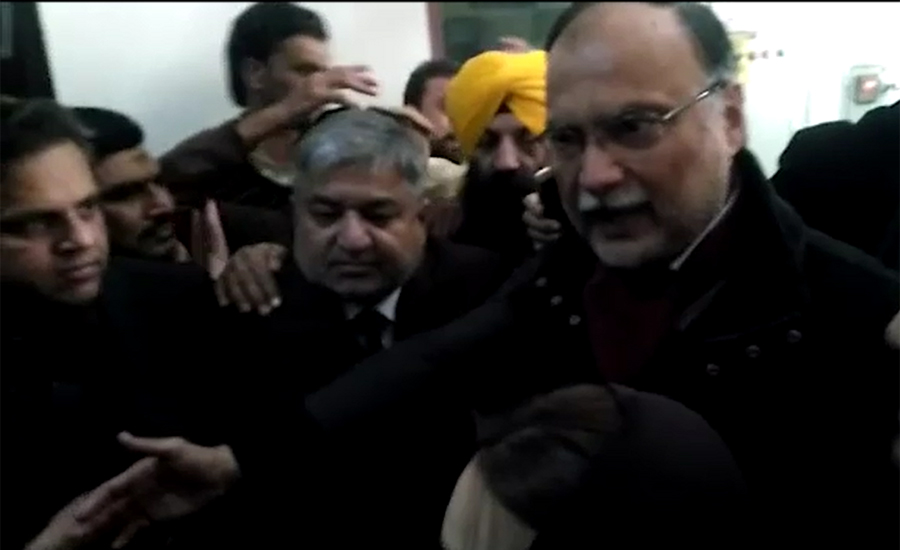 RAWALPINDI (92 News) – The accountability court on Tuesday remanded PML-N leader Ahsan Iqbal in the custody of the National Accountability Bureau (NAB) for 13 days in the Narowal Sports City project. The court ordered to produce him again on January 6. It also ordered the prosecutor to take the PML-N leader to Services Hospital for treatment. Talking to the media during his appearance in court, Ahsan Iqbal said that he said that the punishment is unacceptable if he has been arrested for speaking against the failed government. “The sentence is acceptable if I have been arrested for being loyal to Nawaz Sharif and fulfilling the promise he made with the people of Narowal,” he said. The PML-N said that he made the plan with the project of the vote. “Even then we are thieves and criminals. The cheap tools of the government will not succeed,” he said. https://www.youtube.com/watch?time_continue=2&v=e28HpcWaOAE&feature=emb_title The Rawalpindi National Accountability Bureau (NAB) arrested PML-N leader Ahsan Iqbal in the Narowal Sports City corruption case. The NAB had summoned the PML-N leader. Sources said that Ahsan Iqbal could not reply to the questions put by the NAB. National Assembly Speaker Asad Qaisar has been informed about the arrest of Ahsan Iqbal. According to the NAB, Ahsan Iqbal will be presented before the accountability court for his physical remand on Tuesday. Talking to the media before appearing before the NAB, Ahsan Iqbal said that the government was engaged in character assassination of its political rivals through the NAB. “The accountability becomes a revengeful agenda if it is linked to a political agenda,” he said. He said that the PML-N cannot be subdued by the threats of Imran Khan. In May 2018, the National Accountability Bureau had initiated probe against then minister for planning Ahsan Iqbal for his alleged involvement in irregularities committed in the sports city project. The official press release of the NAB released had stated that NAB Chairman (retd) Justice Javed Iqbal had ordered the bureau to verify the complaints against the alleged misappropriation of government funds – a staggering six billion rupees — in the construction of the Narowal Sports City Project (NSCP). The bureau elaborated that the chairman had taken notice of the matter as rules were violated in the construction of the project and there was also the additional issue of security concerns. The case was intriguing because a special allocation was made in the Public-Sector Development Programme (PSDP) for the project. The funds allocated were then spent through the Sports Board of Pakistan (PSB). According to the PSDP 2018-19 report, the cost of the project was Rs 2.9 billion. Just over Rs 2.5 billion has already been spent while the remaining Rs 467 million have been apportioned for the upcoming fiscal year. One of the major objections against the project was if it was really necessary to build such a huge sports city in a small town like Narowal, when the same funds could have been used to build a similar facility in a bigger city like Karachi, Lahore or Islamabad.