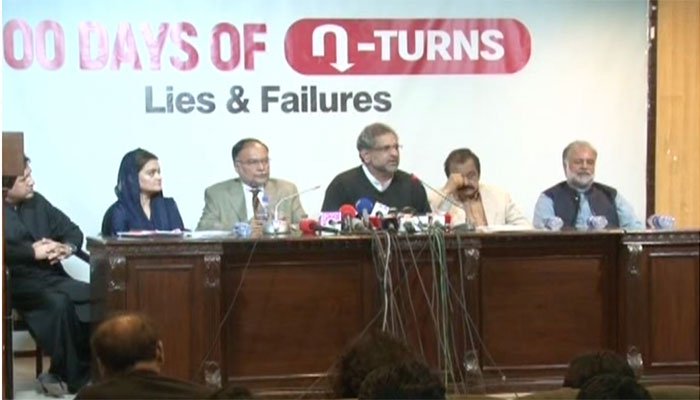 ISLAMABAD (92 News) – Former prime minister and Pakistan Muslim League-N (PML-N) leader Shahid Khaqan Abbsi on Friday termed that Imran Khan still cannot believe till now that he has become prime minister. Addressing a press conference along with other PML-N leaders in Islamabad, Khaqan Abbasi labeled Pakistan Tehreek-e-Insaf’s (PTI) 100 days are 100 lies with the nation. The former PM said that the way inflation has increased recently was not witnessed earlier, adding: “Due to the dollar rate hike, the loans on Pakistan have increased by Rs600 billion. He said that nothing was said about the tax evaders, adding that those who don’t pay taxes weaken the system. The government is defaming themselves, whenever the economy will not progress till no employment can be created for young generations, Abbasi mentioned. The PML-N leader termed that he is the biggest supporter of accountability, saying: “I say to initiate accountability from me and my cabinet.” He lamented that the opposition leader is serving in prison, whereas, Imran Khan and his cabinet should present before accountability, claiming: “I would be responsible If the incumbent ministers cannot be arrested.” While criticising the government’s performance, PML-N leader Ahsan Iqbal said that the prime minister had said that he will end corruption within 90 days but the accountability commission was rolled back in Khyber Pakhtunkhwa. Ahsan Iqbal also claimed that Imran Khan has no competency and also no realization of the upcoming challenges. “Despite passing of 100 days, the prime minister hasn’t learnt the rules of business,” he added. However, the PML-N leaders said that the people kept their money in foreign countries, why the government was not taking action against them. In his earlier address, the prime minister spoke on the dollar reaching an all-time high and said that his government was taking steps to ensure that a shortage of dollars would not exist in the future. Earlier, PML-N spokesperson Marriyum Aurangzeb said that nation should not be disappointed and should search on ‘Google’ the next 100-day plan of Pakistan Tehreek-e-Insaf (PTI).