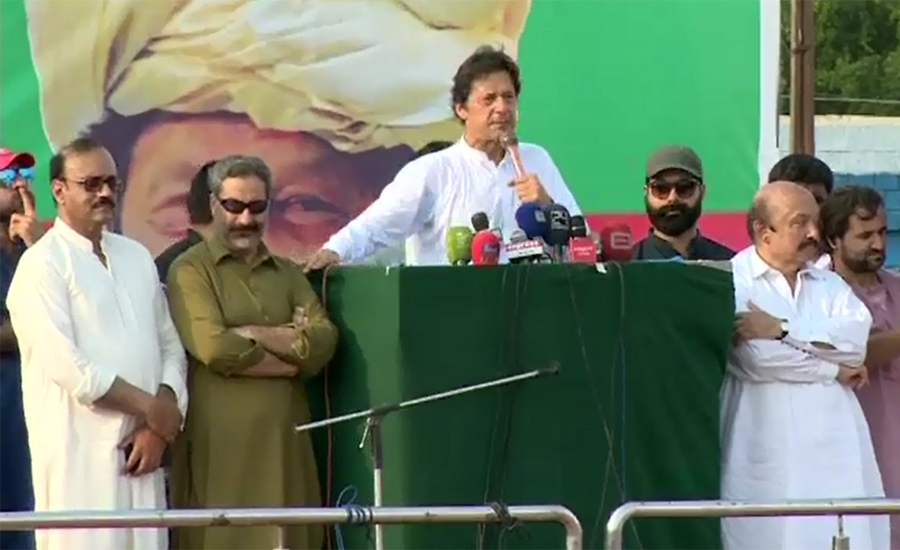 PIPLAN (92 News) – PTI chairman Imran Khan has said that the PML-N government has smashed all the records of corruption and incompetence. Addressing a public meeting on Monday, he said that the price of a dollar has increased by Rs 20 in a month. “The increase in the price of dollar has increased the debt by 1000 billion. The increase in the dollar rate will result in inflation,” he said. Imran Khan e said that the rulers had laundered the money. He said that the country will be fully independent after putting the corrupt rulers in jail. “Nawaz Sharif has sent his two sons to London, while Ishaq Dar has sent his son to Dubai. Their children are billionaires in London and Dubai. When they are asked from where you got the money, they say they are not Pakistani nationals,” he said. Imran Khan said that the people want a government at centre that provides education, employment, that empowers farmers. “Across the world governments take care of their farmers, here we have crushed our farmers. In KP, we have grown one billion and 18 crore trees. They destroyed jungles like Changa Manga. We will do mass plantations across the country and revive the natural eco system that all these corrupt mafias destroyed in their greed. He said that nine days are left here today. “I am telling you all it is your duty to mobilize fellow citizens and ask them to vote for bat... for its ideology. Then why do we wonder why half our population of children has stunted growth? Then years they have been sitting in the government, in Punjab. N league should name one institution they have fixed." The PTI chairman said that look at the minimum wage in the US and UK; 200k a month at average. “In the UK, milk is at 40 rupees a litre, 60 in the US. And in Pakistan it’s at 100 rupees,” he added. “Ten years ago, products like flour, sugar, milk were 1/4 of the price these days. Milk, a basic staple for children, imperative for their growth is so expensive.” He said that during Nawaz sharif’s tenure, oil prices had fallen globally but it was still at an all time high in Pakistan. “This is the price paid by the masses for their looting and incompetence.” Imran Khan said that the self-proclaimed kings go abroad and buy palaces and expensive properties. “They siphon funds from here and their kids sit abroad on billions in businesses. Meanwhile as loans and debt grow, they tax you more to repay those debts. With this inflation your regular income begins to cover less and less of your expenses. This is the point at which you begin borrowing. And this is exactly what is happening to Pakistan. Whatever comes in is siphoned off and stolen,” he said. He said that it is his duty to educate you about the problems inflicted on this nation by the PML-N and the PPP. “The first of which is foreign debt. Your duty this election day is not just to vote yourselves, but to also make sure other people step out to vote for the bat,” he added.