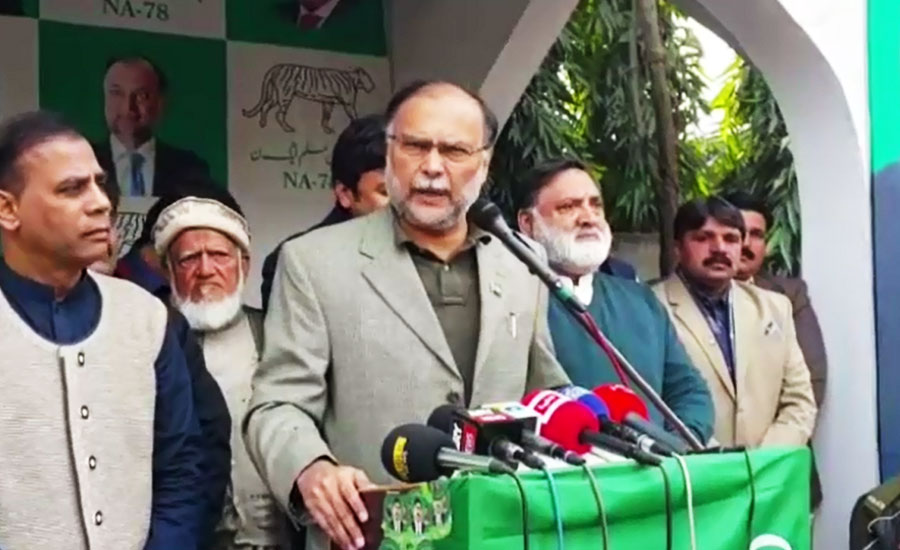 NAROWAL (92 News) – Former interior minister Ahsan Iqbal said on Sunday that the Pakistan Muslim League-N (PML-N) was separated from the rule through anti-democratic forces. Addressing foundation day ceremony of the PML-N, Ahsan Iqbal claimed that if the general election was conducted free, fair and transplant, no one could stop the PML-N from making government. Responding to disgruntle leader of PML-N, the former interior minister said that Nawaz government has not come to end for not accepting the advice of Chaudhry Nisar, while the PML-N was punished for committing the sin of making the country impregnable and forming the China Pakistan Economic Corridor (CPEC). Criticizing their opponent, the PML-N stalwart said ears should not be lent to statements of Fawad Chaudhry because he became loudspeaker of their party. He also declared Minister for Railways Sheikh Rasheed as loudspeaker of the every tenure. Ahsan Iqbal mentioned that Prime Minister Imran Khan was claimed to give one billion jobs before the election but he made the 0.5 million people as unemployed. He further asked that this is a state of Madina where the houses of poor were bulldozed. “No one can stop value of rupee for 4 years artificially. The rupee is receiving kicks like football today. And the prime minister says he does not know how the rupee value fell. Such PM is a threat to national security,” he termed “We have not sought NRO from Imran Khan but NRO has been given to Aleema Khan,” Ahsna Iqbal said. He added that no one can create a crack in the PML-N if someone steps out of this caravan then he will become Chaudhry Nisar. On the other hand, the Pakistan Muslim League-N (PML-N)’s bid to commemorate the foundation of its parent party, All India Muslim League, was held at Naseerabad. Expecting a power show, party workers gathered at Lahore’s Naseerabad area. Pervez Malik, his wife and member Parliament Shahista Pervez Malik and Asad Ashraf were the members who made it to the foundation day festivities.