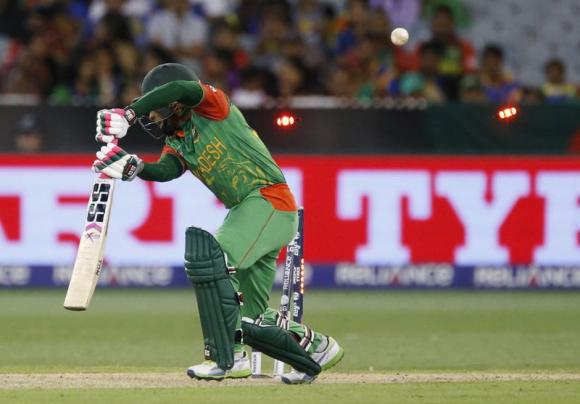 MELBOURNE - Mushfiqur Rahim may not be in the same league as the leading stumper-batsmen at the World Cup such as Brendon McCullum and Kumar Sangakkara but the diminutive Bangladesh glovesman has proved he is no less crucial to his team's progress. New Zealand's success depends to some extent on the kind of start McCullum provides while Sangakkara's role for Sri Lanka is more nuanced, a combination of protector and punisher who must rescue as well as rampage according to match situations. The 167 runs Mushfiqur scored from three innings with a 121-plus strike rate to establish himself as Bangladesh's top scorer in the tournament suggests the 26-year-old is equally central to his team's fortunes. The right-handed batsman top scored for his team in their tournament opener against Afghanistan and walked away with the man-of-the-match prize after the 105-run win at Canberra and played a key role in the team's second victory in the tournament against Scotland on Thursday. Even in the defeat by Sri Lanka, a match where his glovework was sloppy, Mushfiqur contributed 36 quick runs in his team's unsuccessful chase. Endowed with a strong work ethic, Mushfiqur has undergone a major transformation with the bat, evolving from a dour lower order batsman to a smooth-scoring middle order asset. "The last two or three years have gone well for me, but that is in the past," the former Bangladesh captain said before the World Cup, which he saw as a gilt-edged opportunity to prove the team can perform well outside their home comforts. "If we can do well, it will send a message to others that Bangladesh can play well in such conditions," said Mushfiqur, who forms the core of the team with opener Tamim Iqbal and all-rounder Shakib-Al Hasan. Bangladesh, who shared the points with Australia after a washout in Brisbane, are fourth in Pool A, just above England, who they face in their next match on Monday. Mashrafe Mortaza's side will fancy their chances at the Adelaide Oval against a stuttering England before taking on tournament co-hosts New Zealand in their final pool match on Friday. The Kiwis are looking in ominous form but the tournament has seen several upsets in the past, a couple of them pulled off by Bangladesh themselves. Another giant-killing act would go a long way to securing a quarter-final berth and the chances of pulling it off may lie with Mushfiqur and how he performs both in front and behind the stumps. – Reuters