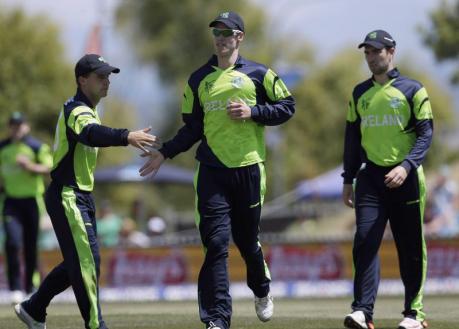 WELLINGTON - Ireland do not expect an easy ride from India in their penultimate World Cup Pool B clash on Tuesday, even though the world champions have already qualified for the quarter-finals with four wins out of four. The Irish have enjoyed an excellent campaign with three wins out of four but still need one more point from their final two matches against India and Pakistan to secure a spot in the knockout stage. "It's a nice position to be in but it doesn't count for anything if we don't keep getting good performances," Ireland captain William Porterfield told a news conference in Hamilton on Monday. "They're obviously qualified but I'm pretty sure they'll be looking to get top spot in the group as well," he added. "I don't expect them to come in any way lightly at ourselves, so we'll be ready for that." With India in fine form, Ireland will be looking to put some pressure on them from the very first ball at Seddon Park. While the Indians can almost take for granted a strong batting line-up, Porterfield thought their bowlers had also acquitted themselves well in their four-wicket victory over West Indies last week. "Whatever we do first tomorrow, we have to start well," he said. "Seeing how hard India came out after West Indies, I don't think they've necessarily got a weaker suit as such. "The first 10 overs is going to be big, we have to start the game well and get into it." Porterfield has become pretty much the spokesman for the battle against the International Cricket Council's plan to reduce the field from 14 to 10 teams for the next World Cup. Since the cut will most likely be made at the expense of non test-playing nations, he sees Ireland's qualifying for the knockout rounds as having wider significance than just national pride. "Hopefully we do make those quarter-finals and keep pushing on as a country ourselves, and hopefully the ICC will take notice and we'll start looking at the next World Cup," he said. "If you want to progress your game and grow the game of cricket, then cutting teams in world competitions isn't the way forward." Indian seamer Mohit Sharma said the team were well aware of the threat Ireland presented and they would need to be on top of their game to win a fifth straight match. "They played good games earlier and still have a chance to qualify," he said. "They have a good team. We have to play well to beat them, and we'll try to do it."