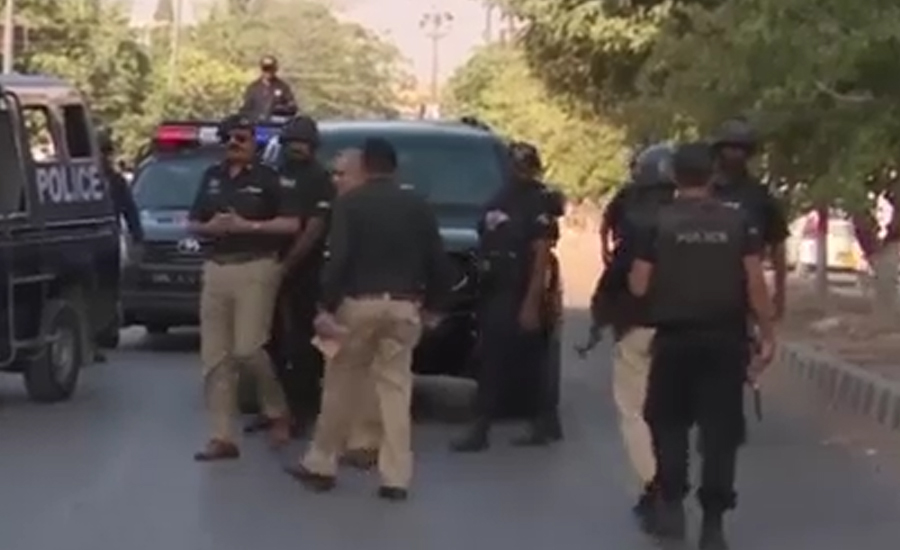 KARACHI (92 News) -  A policeman was martyred and two motorcycle thieves were killed in an encounter near Eidgah Ground Nazimabad in Karachi on Thursday. According to the reports, three thieves were caught stealing motorcycles near Nazimabad’s Eidgah Ground at Thursday morning by four policemen. The thieves resisted and opened fire at police, as a result of fire, a policeman identified as Zeeshan was martyred and two dacoits were killed, while one managed to flee away from the scene. The bodies were all taken to Abbasi Shaheed Hospital. Central SSP Arif Aslam said raids are being conducted to arrest the third suspect. The other two have been identified as Habib and Abdul Basit. They were from Balochistan’s Khuzdar. Earlier, four terrorists were killed in an encounter with the police in Shah Latif Town. SSP Rao Anwaar said that they raided a place on a tip-off and the terrorists opened fire on them. He said that the police also retaliated, killing four terrorists including Maulvi Ishaq and Nazar. The SSP said that the terrorists belonged to the banned Lashkar-e-Jhangvi and Daesh. “Maulvi Ishaq was a key commander of the Lashkar-e-Jhangvi. He was the gunman of TTP commander Hakeemullah Mehsud,” he added. He said that Nazar was involved in attacks on an Imambargah on M Jinnah Road, PNS Mehran and police, Rangers and Army officials. Rao Anwaar said that three TT pistols, a rifle and a motorcycle were recovered from the terrorists.