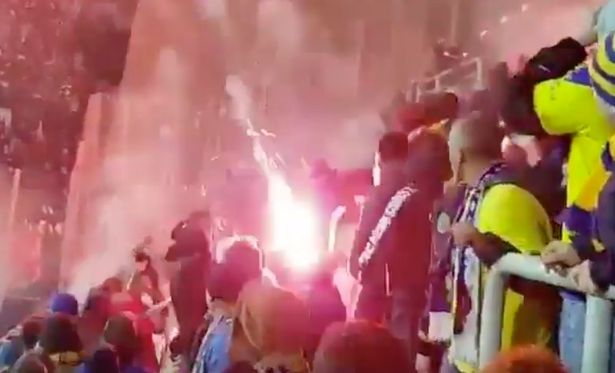 WARSAW (92 News) – Suddenly Fights started between Polish football fans in Marseille and the moment two sets of rival fans begin throwing flares at each other during a football match. The incident was captured by a supporter, who watched in shock as red fireworks were hurtled back and forth in the stadium. On the pitch Lechia Gdansk were facing off against Arka Gdynia in a game that finished 1-1, but it was the ugly scenes in the stands that caught everyone's attention. Trouble started to brew between the two sets of fans near each other in the corner of the ground. Suddenly flares are thrown by some of the supporters, landing between seats and continuing to burn dangerously close to people. The other supporters then retaliate and throw fireworks of their own and before long missiles are being hurtled from every direction.