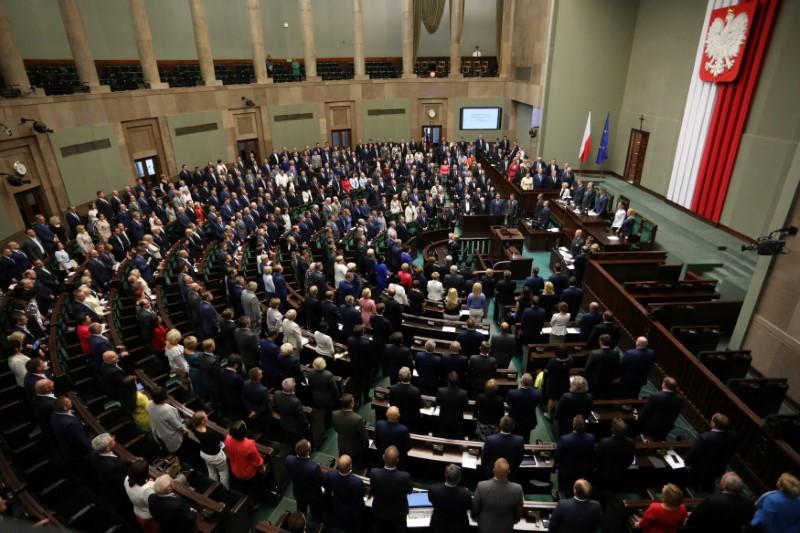 WARSAW (Reuters) - Surrounded by security guards and amid opposition deputies' shouts of "shame" and "disgrace", Poland's parliament debated a bill on Tuesday that critics say would erode the independence of the judiciary.

The ruling Law and Justice Party (PiS), which has defied past accusations by critics including the European Union that its policies undermine media freedom and civil liberties, is seeking reforms it says will make the Supreme Court more accountable.

The debate follows a bill passed on Friday that will end the terms of current members of the National Council of the Judiciary (KRS), one of main judiciary organs in Poland, and give parliament powers to choose 15 of its 25 members. That would deliver effective control to PiS with its large majority.

The PiS is a socially conservative party, espousing what it sees as traditional national values at a time of eurosceptcism. That conservatism is tempered by more "left-wing" welfare policies.

The parliament building has been cordoned off by barriers since Sunday, when thousands rallied against the Supreme Court reforms that would give the PiS broad freedom to replace all its judges. They are currently appointed by the President at the suggestion of the KRS.

A small group of protesters urged lawmakers on Tuesday as they were walking into the building to vote against holding the debate.

"Cowards, cowards," deputies of the parliamentary opposition chanted as the speaker of the chamber began the debate.

Critics and the centrist opposition say the new proposals violate the constitutional separation of powers, something the government denies.

PiS says it has a democratic mandate to make the judiciary more efficient and accountable. Since winning the 2015 election, it has overhauled the constitutional court and given the Justice Ministry control over the prosecutor general's office.

Threatening to take Poland to court, the European Union executive has said those measures undermined democratic checks and balances.

In December, Poland saw its biggest political standoff in years when oppositions leaders blocked for a month the parliament's plenary hall podium ahead of a budget vote, after objecting to plans by PiS to curb media access to parliament.

Pawel Olszewski, a member of the largest parliamentary opposition grouping, the Civic Platform, called for a moment of silence after the vote on the debate took place on Tuesday, "because on this day, July 18, our democracy is de-facto dying".