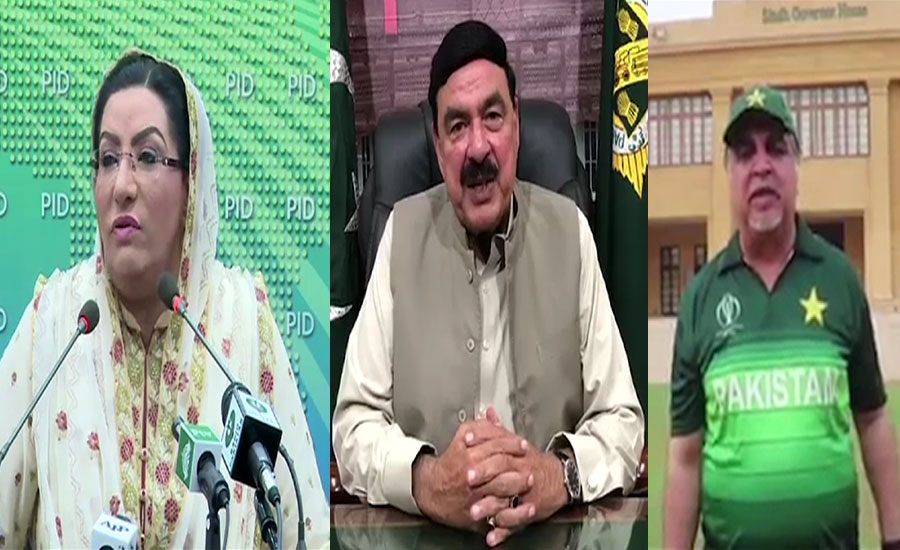 ISLAMABAD (92 News) – Pakistani politicians on Sunday sent well-wishes for the success of Pakistan team, ahead of the clash with India in the group stage match of the ICC World Cup 2019 at Old Trafford Cricket Ground in Manchester, England. Special Assistant to the Prime Minister for Information and Broadcasting Firdous Ashiq Awan said, “The entire nation is praying for Pakistan cricket team’s success…your hard work will elevate the stature of the national flag. “Your team work and professionalism will yield fruitful result,” she stated. Commenting on the Pakistan, India match, the Pakistan Tehreek-e-Insaf (PTI) leader said that the Indian team would face same situation which Indian Prime Minister Narendra Modi in Kyrgyzstan. Minister for Railways Sehikh Rasheed declared the Pak-India cricket as plus cricket and advised the national team to enter in the playground with bravery and passion. Sindh Governor Imran Ismail expressed full support with Pakistani team and advised to Pakistani skipper Sarfaraz Ahmad, “Don’t be frightened, all prayers of nation with you.” Senator Faisal Javed urged Sarfaraz Eleven to show passion same like Champions Trophy. Usman Dar, Khursheed Shah, Shehla Raza, Firdous Shamim Naqvi, Khawaja Izhar and other political leaders prayed for the success of national team.

It is pertinent to mention here that Imran Khan led Pakistan to a Cricket World Cup victory in 1992.

The former captain Pakistan and cricketing legend gave his suggestions in a series of messages on Twitter. “When I started my cricketing career I assumed success was 70% talent & 30% mind. By the time I finished playing cricket I felt it was 50-50 ratio,” he said.“But now I tend to agree with my friend Gavaskar it’s 60% mental strength & 40 % talent. Today role of mind will be more than 60%.” The former Pakistani cricket skipper continued by commending captain Sarfaraz Ahmed for his boldness. “Today, given the intensity of the match, both teams will come under great mental pressure and the power of the mind will decide the outcome of the match today. In Sarfaraz we are fortunate to have a bold captain & today he will have to be at his daring best.” He continued by telling the Pakistani players to remove all fears from their minds and to not be in a negative state of mind. “All fears of losing should be banished from the mind as the mind can only process one thought at a time. Fear of losing leads to a negative & defensive strategy & crucially mistakes by opponents are not pounced upon,” he said, continuing to give three crucial suggestions to the captain. “1. In order to have a winning offensive strategy Sarfaraz must go in with specialist batsmen and bowlers because “Raillu Kattas” rarely perform under pressure – especially the intense kind that will be generated today. “2. Unless pitch is damp, Sarfaraz must win the toss & bat.” “3. Finally, even though India may be the favourites, banish all fear of losing. Just give your best and fight till the last ball. Then accept whatever the result like true sportsmen,” he said. He concluded his messaged by wishing luck to the team. “The nation’s prayers are with all of you. Good Luck.”