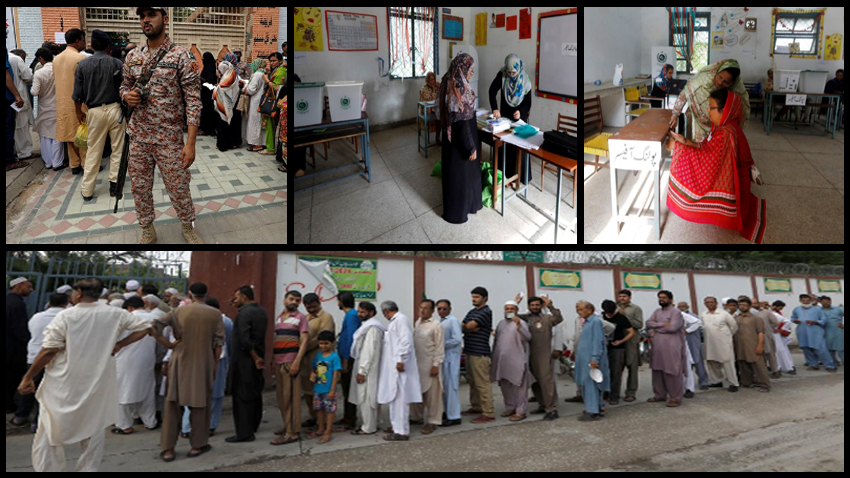 ISLAMABAD (92 News) – The votes count is underway after the polling ended across the country on Wednesday. Polling began at 8AM across the country at 85,307 polling stations and continued until 6PM despite calls by several major parties, including PML-N, PPP and PTI, to extend the polling time by an hour. The nation voted in General Elections 2018 with the key contest being among Pakistan Tehreek-e-Insaf (PTI) chief Imran Khan, Pakistan Muslim League-N (PML-N) President Shehbaz Sharif and Pakistan Peoples' Party Bilawal Bhutto Zardari's (PPP). The voting ends at 6 pm and counting of votes have been started and continued across Pakistan on July 25. During the polling, long queues of the people observed all the day. – Election Results to be transmitted through modern system – The election results will be transmitted through the fastest and modern system. According to the Election Commission, Results Transmission System (RTS) is linked to 80,000 polling stations across the country. Chief Election Commissioner Sardar Muhammad Raza Khan will announce first election result. Media is not permitted to announce election results before 7pm. All the results will be released through RTS and Result Management System to ensure accuracy and promptness. – Polling process – As many as 106 million registered voters of Pakistan will choose their representatives in the national and provincial assemblies as well as their next prime minister. The country's 17,007 polling stations from 85,307 have been declared 'highly sensitive'. As many as 12,570 candidates are contesting for a total of 849 seats of national and provincial assemblies in the general election. For conducting free, fair and transparent polling process, the Election Commission of Pakistan (ECP) has deployed staff of around 1.6 million people at polling stations across the country. As many as 450,000 policemen and three hundred thousand army troops will be deployed on the polling day. There is a public holiday on Wednesday. – Seats in assemblies – National Assembly comprises a total of 342 members, of which 272 will be directly elected today whereas the rest — 60 seats reserved for women and 10 for religious minorities — are selected later through proportional representation among parties with more than five per cent of the vote. – Seats require to make government – All the parties are trying to secure more seats in election but a party can only form the government if it manages to clinch 172 seats in total. – Method to do away with fake votes) – The national electoral body said late Tuesday night it had formulated a method to do away with fake votes from the process by allowing tender votes to be cast instead. If a voter brings to attention a fake vote, the ECP noted that they will be asked to cast a tender vote in its place. The team at the polling station will verify the person who highlighted the fake vote and that it will count the tender votes separately. – Constituencies where polls postponed – The polls have been postponed on NA-103 (Faisalabad) NA-60 (Rawalpindi), PP-103 (Faisalabad), PK-99 (Dera Ismail Khan), PB-35 (Mastung), PP-87 (Mainwali), PK-78 (Peshawar) and PS-87 (Malir). – Result management system – The ECP has installed a result management system ahead of General Elections 2018. The ECP said it has successfully tested the service twice. Earlier on Tuesday, ballot papers and other election material was provided to presiding officers throughout the day. However, candidates continued their door-to-door campaign to seek votes. Over 12,570 candidates are in the run for 270 seats of National Assembly and 570 seats of four provincial assemblies. According to the electoral rolls, 105.96 million voters will cast their vote. In all, 85,307 polling stations have been set up across the country.