Pope Francis falls over as he arrives for ceremony in Poland 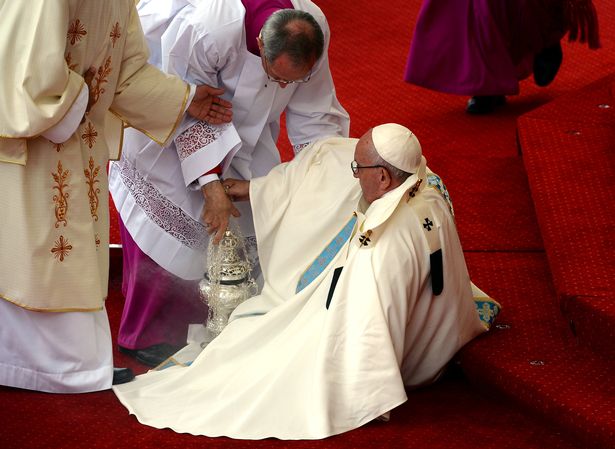 Pope Francis falls over as he arrives for ceremony in Poland

WARSAW (92 News) – Pope Francis fell over as he arrived for a ceremony in front of millions of people watching around the world. The head of the Catholic Church was walking towards an altar in Poland when he took a huge tumble and fell straight to the ground. A group of other priests raced to help the Pope back to his feet just before the service began. Pope Francis was arriving to celebrate a mass at the southern Black Madonna shrine of Częstochowa to mark the 1,050th anniversary of the Baptism of Poland. Despite the fall, the 79-year-old Pontiff got back to his feet and continued taking mass in front of thousands of people at the venue and millions more watching on live streams around the world. Pope Francis arrived in Poland on Wednesday and will be in the country touring various religious and cultural locations until Sunday - when he is taken back to Rome. The Pope arrived in Poland amid the horror attack on a French Catholic priest by ISIS murderers. Speaking about the attack yesterday he said this and a string of other attacks were proof the "world is at war". However, speaking to reporters aboard the plane taking him to Krakow for the start of an Catholic youth jamboree, he said he was not talking about a war of religion, but rather one of domination of peoples and economic interests. After his arrival under heavy security in Krakow, the pope also took on Poland's conservative government, implicitly criticizing its anti-immigration stance. But his strongest words of the day came while talking to reporters about the killing of Father Jacques Hamel, who on Tuesday was forced to his knees by suspected militants who then slit his throat.