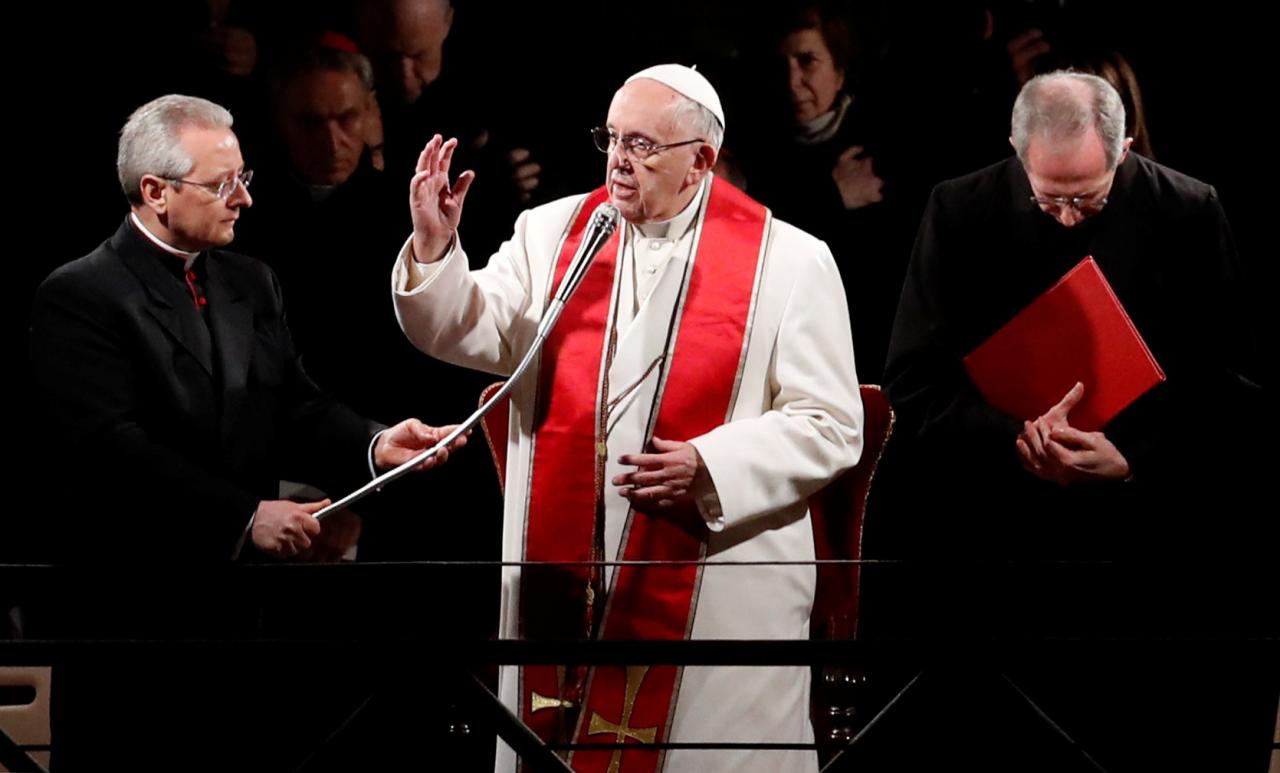 ROME (Reuters) - Pope Francis led Roman Catholics in Good Friday services under tight security, urging people, including ministers of his Church, to rediscover the capacity to feel shame for their role in the world’s ills. Francis, 81, presided at a traditional Via Crucis (Way of the Cross) procession around Rome’s ancient Colosseum attended by 20,000 people on the day that Christians commemorate Jesus’ death by crucifixion. Security was tighter than last year, with more checks as participants approached the area. This week, Italian police carried out four raids against suspected supporters of Islamist terrorism, arresting seven people, including one man who was planning a truck attack. The Colosseum, in Rome’s historic centre, is one of the tourist attractions in the city where police have set up military jeeps and armoured vehicles to form barriers against truck attacks. Several have also been set up near the Vatican. Francis wove his comments, made at the end of the torchlight service, around the themes of shame and repentance, conjuring up the image of a modern world where pride, arrogance and selfishness often trump humility and generosity. Speaking in sombre tones, he spoke of “shame because so many people, even some of your  ministers, have let themselves be deceived by ambition and vainglory, thereby losing their worthiness .. “ Since his election in 2013, Francis has often urged Catholic priests and prelates to live simply, to serve others, and not to seek careers and status in the Church or in society at large. Good Friday, the most sombre day of the Christian liturgical calendar, commemorates the day the Bible says Jesus was crucified. The Way of the Cross service marks 14 events, called stations, from the time Roman governor Pontius Pilate condemns Jesus to death until his burial in a tomb.

Francis said many people in the world today should feel “shame for having lost a sense of shame”, adding that shame could be seen as a “grace” from God.
He said many should feel “shame because our generations are leaving young people a world that is fractured by divisions and wars, a world devoured by selfishness ...” The leader of the world’s 1.2 billion Roman Catholics praised those in the Church who are trying to arouse “humanity’s sleeping conscience” through their work helping the poor, immigrants, and prison inmates. This year’s meditations, one for each of the “stations” were written by high school and college students in Rome. Earlier on Friday in St Peter’s Basilica, Francis presided at a “Passion of the Lord” service, during which he prostrated himself in prayer on the marble pavement. On Saturday night, Francis leads an Easter vigil service and on Easter Sunday he delivers his twice-yearly “Urbi et Orbi” (to the city and the world) message.