Pope of the people, and the politics, in historic US visit 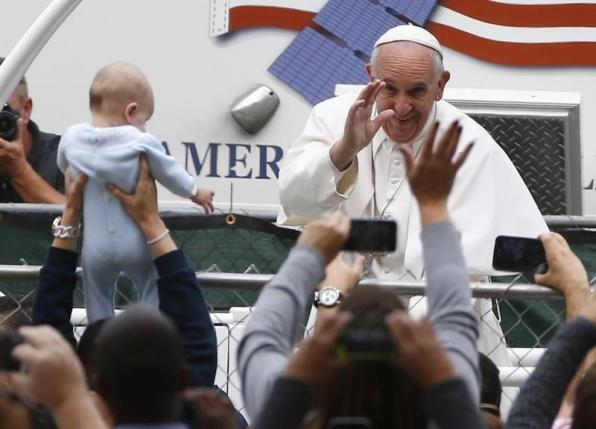 Pope of the people, and the politics, in historic US visit

PHILADELPHIA - Pope Francis dove into some of the United States' thorniest political debates during his historic visit by urging the world's wealthiest nation to welcome immigrants, to end homelessness and do more to address climate change. Sometimes his political messages were blunt, like when he pleaded before the US Congress for Americans to end "hostility" toward immigrants. Other times, they were more subtle, like the climate-conscious pope's decision to ride around in a tiny Fiat rather than a gas-guzzling SUV. While Vatican officials said the pope was only re-stating Church social teachings and not making political statements in his first US visit ever, many in the public and across the political landscape saw it differently. Among them, 42-year-old Gabriela Muñoz of Brooklyn, an undocumented immigrant from Mexico, who said the pope's comments on immigration had given her "a lot of hope and faith. "Even if it's a small thing, it has to have touched the heart of congressmen," she said. But in an acutely polarized Congress, it was unclear if lawmakers' minds were changed by Francis' words in Washington or at the United Nations, where he condemned the "boundless thirst" for wealth and power. Shortly before arrival, Francis denied he was a leftist, despite his criticisms of the excesses of capitalism. His speeches gave both Democrats and Republican fodder to support the intense partisan battles that define modern Washington. On some matters, he likely arrived too late to make a difference. The first Latin American pope reiterated, in a veiled reference, the Roman Catholic Church's opposition to abortion and defended traditional notions of the family in a nation where gay marriage is now the law of the land. Beyond the halls of power, the immensely popular 78-year-old pope made numerous stops in Washington DC, New York City and Philadelphia to commune with the people, capping the visit with a huge open-air Mass in Philadelphia for hundreds of thousands of people on Sunday. "Life means 'getting our feet dirty' from the dust-filled roads of life and history," the pope told a group of prisoners he visited Sunday morning. "All of us need to be cleansed, to be washed, all of us and me in the first place." WAS HE HEARD? Francis emphasized the plurality of faith, taking part in a service with representatives of six other religions at the site of New York's former World Trade Center towers, which were destroyed in the Sept. 11, 2001, attacks. He repeated the call made in the first-ever papal encyclical to focus on the environment, "Laudato Si," praising President Barack Obama for his actions on reducing air pollution while urging Congress and world leaders at the U.N. to do more. After exhorting Congress to work for the common good of the people, he went straight to lunch with the homeless and said there was "no moral justification" for their plight. Kristen Bushka, a 36-year-old Philadelphia resident who came out to catch a glimpse of the pope, said his messages cut across party lines. "You see Democrats taking from his speeches and you see Republicans taking from his speeches," Bushka said. "I don't think the pope has a political agenda. I think what he says is relatable to everyone." Within minutes of Francis' historic address to Congress, lawmakers for each party cited his words to bolster their arguments and contended that the other side failed to understand the message. "Washington didn't ignore it, but they are incapable of following the pope's suggestions. It's just that simple," said Larry Sabato, director of the Center for Politics at the University of Virginia. "I think the pope had more impact on average Americans. That is where there might be an impact." Eric LeCompte, executive director of the Jubilee USA Network, a nonprofit that advocates for debt relief for developing countries, was more hopeful. "Does it make a difference for all of Congress? No," LeCompte said. "But for some members of Congress, he has provided cover to take political risks and start to reach across the aisle again." The Argentine-born pope is more comfortable speaking Spanish, which he used to deliver most of his homilies to Catholics during the visit, but gave his speech in the Capitol in heavily-accented English. That likely reflected his desire to deliver his message as directly as possible to the American people, said Thomas Groome, executive director of Boston College's Center for the Church in the 21st Century. "It was definitely his attempt to communicate according to the mode of the receiver," Groome said. "We have to wait and see, I suppose, on what the long-term effect of it is." 'SON OF IMMIGRANTS' At a time when immigration is a hot-button issue in the 2016 US presidential race, with Republican front-runner Donald Trump vowing to build a wall along the US-Mexico border, Francis played up his own heritage in calling for tolerance. He noted that he was the "son of immigrants" to Argentina from Italy and spoke in his native Spanish to crowds of Latino Catholics, saying their heritage was nothing to be ashamed of. Phil Tran, an 18-year-old who immigrated to the United States from Vietnam as a young child and is now in his first year of studying for the Catholic priesthood, said he was moved by Francis' focus on immigration. "He says that he, too is child of immigrants," Tran said. "He is a pope who stands for the whole family." Not every one who heard his words welcomed that message. "I think we should close our borders," said Loretta Sabella-Vigliona, 65, whose her brother firefighter Thomas Sabella, died in the attacks and came out to see Francis at New York's 9/11 Museum. "We have too many people coming here." -Reuters