Pope prays for Cuban reconciliation on eve of US visit 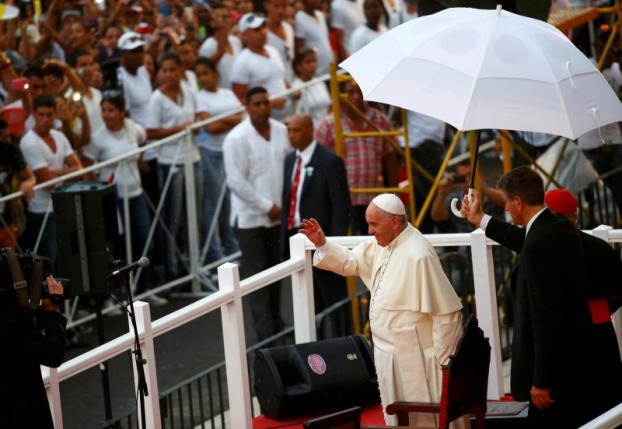 Pope prays for Cuban reconciliation on eve of US visit

SANTIAGO DE CUBA - Pope Francis prayed for reconciliation among Cubans at home and around the world on Monday on the eve of his landmark trip to the United States, where he is expected to further encourage the historic rapprochement between two former foes. The pope ended his last full day in Cuba at its holiest sanctuary, the shrine of the Virgin of Charity of El Cobre outside Santiago, the island's second-largest city. "Mother of Reconciliation, reunite your people dispersed around the world," said the prayer he read. "Make the Cuban nation a home of brothers and sisters so that this people open wide their minds, their hearts and their lives to Christ ...," it said. An estimated 2 million Cubans have left the island since the 1959 revolution with some 1.3 million currently living abroad, most of them in the United States, where many exiles remain bitterly estranged from their homeland. The sanctuary where the pope spoke holds the small wooden effigy of the Madonna and Child. According to tradition, the statue was found at sea - miraculously dry - in the early 1600s by three salt-gatherers and holds deep significance for Cubans. The devotion goes beyond Catholics. For practitioners of Santeria, which came to Cuba with the slave trade, the small dark-skinned image represents Ochun: a maternal, sensual deity of love, femininity and water, associated with the colour yellow. The prayer took on added significance because the pope read it the night before he travels to the United States, which resumed diplomatic ties with the Communist island in July following a Vatican mediation that ended more than half a century of antagonism. The pope looked tired at the end of a long day that included three cities, appearing to have a pain in one of his legs as he tried to kneel. He suffers from sciatica. Earlier on Monday Francis, who has made going to the peripheries of countries a hallmark of his papacy, became the first pontiff to visit the eastern provincial city of Holguin, capital of the region where the Castro brothers and leaders of Cuba, Fidel and Raul, grew up. There he celebrated Mass with tens of thousands of people in sweltering heat. Monday was a special day for Francis, 78, because it was on that day in 1953 when the Argentine pope said he first felt a calling from God. The then 17-year-old Jorge Mario Bergoglio was heading to meet friends for a picnic marking the start of spring in the southern hemisphere when he felt an urge to enter a church he was passing in Buenos Aires. It was there that he felt a strange pull. "I can't say what is was but it changed my life," he told one biographer. DETENTIONS OF DISSIDENTS As has happened since Francis began his visit on Saturday, security agents detained several dissidents. Three were briefly held in Holguin and five in Santiago, activists said. The Vatican has not yet commented on the detentions. A Cuban human rights group said 50 to 60 government opponents had been arrested in total and several dozen more blocked in their homes by state security agents. Since his arrival the pope has not made any overt political statements but has used his homilies to send messages laced in spirituality about the need for change in the one-party Communist country. He has urged Cubans to have the courage to think out of the box and to be tolerant of other people's ideas. At Monday's Mass in Holguin, he urged his listeners "not to be satisfied with appearances or with what is politically correct." The gentler approach, a contrast to the tack taken by his two immediate predecessors when they visited, seems to be dictated by a desire to quietly encourage Cubans at a time when the country is at a delicate crossroads following the resumption of ties with the United States and greater space for the Church. The government of President Raul Castro, who attended the Holguin Mass, had hoped the 78-year-old Francis would explicitly condemn the still-intact US economic embargo against Cuba before leaving on Tuesday for Washington. He has not done so yet but on arrival on Saturday, he did urge the old Cold War foes to deepen their detente after this year's restoration of relations. -Reuters