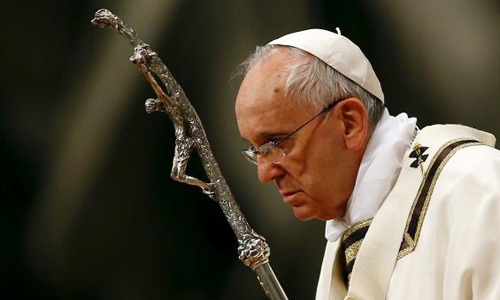 ROME - Pope Francis led the world's 1.2 billion Roman Catholics into Easter on Saturday night, urging them at a vigil Mass to shun indifference and boldly live their faith. Marking the third Easter since his election in 2013, the pope maintained an Easter vigil tradition by baptizing late entries into the Church. He administered the sacrament to a 13-year-old Cambodian girl and nine adults, including a 66-year-old woman from Kenya, the country where al Shabaab Islamist militants killed 148 people at a university, apparently singling out Christians to kill while letting some Muslims escape. At his Good Friday service a day earlier, he prayed for persecuted Christians. One of the adults newly welcomed into the Church was a 29-year-old Italian citizen of Egyptian origin, whose name indicated he may have been born into a Muslim family. He chose Paul as his new Christian name. The Vatican gave no details of their previous religious backgrounds. In his homily, Francis called on Catholics to learn how to "enter the mystery" of Easter, the commemoration of the Christian belief that Jesus rose from the dead three days after his crucifixion. "To enter into the mystery means going beyond our own comfort zone, beyond the laziness and indifference which hold us back, and going out in search of truth, beauty and love," Francis said. "It is seeking a deeper meaning, an answer, and not an easy one, to the questions which challenge our faith, our fidelity and our very existence," he said. St. Peter's Basilica was in darkness for the start of the service to signify the darkness in Jesus' tomb between his death and resurrection. The faithful held lit candles as the pope walked up the main aisle, and then the basilica's lights were turned on in a blaze. Signifying the end of the penitential season of Lent, which began on Feb. 18 with Ash Wednesday, the basilica's great bells rang out at the mid-point of the Mass. On Sunday, the pope will say another Mass in St. Peter's Square and then deliver his twice yearly "Urbi et Orbi" (to the city and the world) blessing and message from the basilica's central balcony. - REUTERS